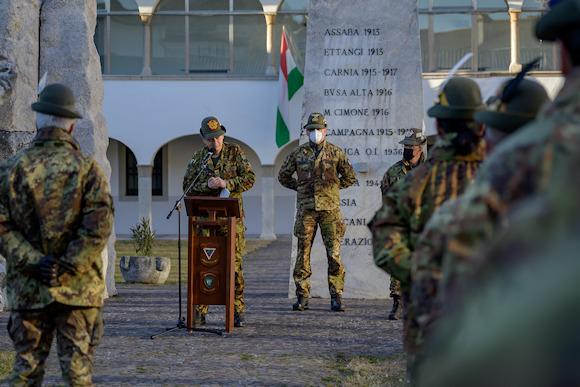 In recent days, the commander of the Alpine troops, general of the army corps Ignazio Gamba, visited the “Julia” in the offices of Friuli Venezia Giulia and Veneto. The visit began in Udine, in the "Di Prampero" barracks, headquarters of the "Julia" brigade command, led by Brigadier General Fabio Majoli, where in the past General Gamba served as chief of staff and, subsequently, as 41st commander, from September 2012 to September 2014, a period during which the unit was also employed in Afghanistan (in 2013), in Herat, as part of the NATO ISAF mission.

The current situation of the brigade and the training and operational tasks assigned to the unit in the immediate future were illustrated to the senior officer. The training activities in the mountains, the operation Safe Roads and the celebrations of the 150th anniversary of the constitution of the Alpine troops, make the year that has just begun already full of events in which the Alpine troops of the "Julia" will be engaged.

General Gamba in his greeting to the staff of the brigade command thanked General Majoli and all those present for their commitment during the training and operational activities. The commander of the Alpine troops also highlighted his satisfaction with the effective implementation of new and more modern tools for command and control, essential for the correct management of operations as well as its intention to concentrate efforts in the immediate future for the development and modernization of the Friulian training areas.