The gen. Graziano awarded the gold medal for the merit of the CRI 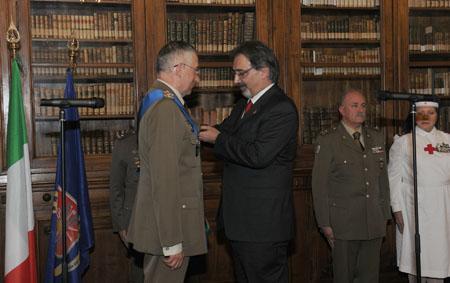 This afternoon, at the central military library of the General Staff of the Army, Gen. CA Claudio Graziano, Chief of Staff of the Army, was awarded the Gold Medal of Merit of the Italian Red Cross for his intense activity carried out as Force Commander and Head of Mission of the Unifil mission from the 2006 to the 2009.

General Graziano, we read in the motivation, has contributed to developing, in collaboration with the Italian Red Cross, civil and military cooperation projects in the entire area of ​​responsibility, towards the local population, highlighting a very high sensitivity and proximity to noble ideals of the Red Cross and Red Crescent Movement, contributing significantly to the stabilization process of the delicate Middle Eastern area. The recognition was presented by the National President of the Italian Red Cross and Vice President of the International Red Cross, Avv. Francesco Rocca, in the presence of the National Inspector of the Military Corps of the CRI, Major General Gabriele Lupini and the National Inspector of the Corps of Volunteer nurses, Sister Mila Brachetti Peretti. During the ceremony, the Army Chief of Staff recalled how "the Army had a close collaboration with the Corps of Volunteer Nurses in all international missions. The Military Corps of the CRI and Volunteer Nurses - the general recalled - was also present in the first Italian mission abroad after the war under the aegis of the UN, intervening in Korea with a field hospital. The Italian Red Cross - concluded the general - It has taken everywhere its values ​​which are shared by the Armed Forces and the Italian Army ". The National President of the Italian Red Cross, in recalling that this year marks the 150th anniversary of the foundation of the Corps, underlined how "the history of the Italian Red Cross is inextricably linked to the history of the Army, with a trait of auxiliary that does not we want to lose because it is a feature we are proud of. The protection of institutions goes hand in hand with the protection of the weakest. In this our two institutions find a perfect synthesis when they are called to collaborate ".

The "European Wind" exercise represents the culmination of an intense training cycle, planned and directed by ...
3651
Read

In recent days, the basic mountaineering course was completed in favor of two reconnaissance platoons of the 173rd brigade ...
7723
Read