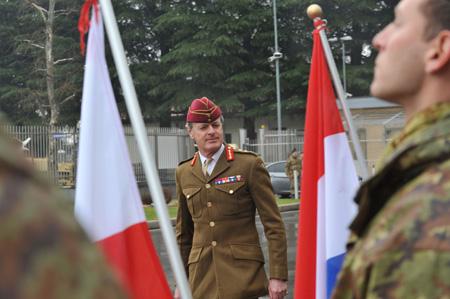 On his arrival he was received by the Commander of the NRDC – ITA, the Army Corps General Giorgio Battisti, returned the week before to Italy from Kabul where he held the post of Chief of Staff of the International Security Asistance Force mission (ISAF ). General Shirreff has been updated on the development of the activities that will allow the Solbiate NATO Command to reconfigure itself into Joint Task Force Headquarters (JTFHQ) with operational, as well as tactical, capabilities and with an increasing presence of Navy personnel and the Italian Air Force. The General Officer particularly appreciated the functional-logistic capabilities that the Support Brigade is able to assure to the NRDC Command for its unique and unique structure, compared to the remaining high readiness Commands (HRF), suitable to guarantee, with the its pawns, a support adherent to the needs. After the traditional signature of the Register of Honor, General Shirreff met with the Senior of the fifteen Nations that make up the NRDC-ITA. Before leaving, Deputy SACEUR expressed flattering words of thanks for all that Italy is doing to meet NATO's ambition levels.

From 5 to 18 September 2022, the “Folgore” parachute brigade participated in the multinational exercise “FALCON ...
7434
Read