The Army's logistic command in training with the Navy 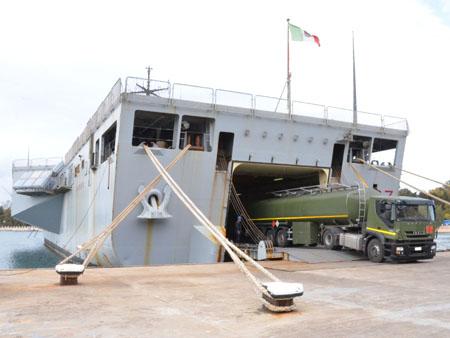 As part of the training activities planned for the 2014, the Army Logistics Command today employed its own personnel and vehicles at the port of Brindisi, in a joint exercise with the Navy, in a logic of inter-agency planning and cooperation , to increase the ability to move the transport area of ​​the logistics area according to an intermodal approach.

In particular, the Army Logistic Commands North (Padua) and South (Naples) managed the embarkation and disembarkation of 8 vehicles for the "Casilina" Rome Transport Regiment on the San Marco ship (Landing Platform Dock, LPD) of the San Giorgio class, verifying the procedures for loading and for the supply of materials, simulating humanitarian aid in anticipation of possible operational uses, of projection outside the national territory or in the homeland, in areas of complex crisis.

Among the vehicles of the Italian Army were embarked: the Stralis tanker, a newly introduced vehicle, capable of building a 42.000-liter field fuel depot; the Astra HD-7 vehicle, which allows you to combine three different types of semi-trailers thanks to its versatility; the APS-95, which is the backbone of military intermodality, as it is able to autonomously load and unload containers, shelters and tanks without lifting devices.

The Army Logistics Command has the task of identifying, finding and assigning the necessary resources for the logistical support of the Army units using, in addition to the 5 departments (Transport and materials, Commissariat, Health, Veterinary and Technical), two commands peripherals in Padua and Naples and the Central Inspection Core. It also issues logistics guidelines, plans and conducts refueling activities at home and abroad.

The "European Wind" exercise represents the culmination of an intense training cycle, planned and directed by ...
3457
Read

In recent days, the basic mountaineering course was completed in favor of two reconnaissance platoons of the 173rd brigade ...
7634
Read

With the ceremony of delivery of the green beret and the winged lion, symbols of the youngest specialty of the ...
5567
Read

It ended in recent days, at the PACUB (Combat Training Course in Populated Centers ...
1402
Read

The "Trident Maris 2021" exercise conducted by the anti-aircraft artillery departments of the ...
1353
Read