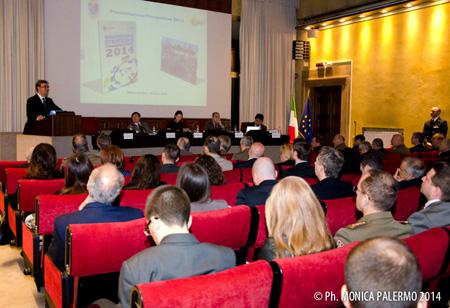 Yesterday, at the Centro Alti Studi per la Defense, the 2014 Perspectives volume of the Military Center for Strategic Studies (CeMiSS) was presented, a work that identifies new opportunities and crises in an increasingly complex international system with reference to the short to medium term.

The team admiral Rinaldo Veri, president of the CASD and the general of division Nicola Gelao, director of CeMiSS, introduced the round table, moderated by the Rai journalist Barbara Carfagna in which the following took part: Alessandro Politi, political and strategic analyst, Paolo Quercia, director of CENASS (Center for Near Abroad Strategic Studies), Nicola Pedde, director of the Institute for Global Studies and of research on the Middle East and the Persian Gulf and Marco Massoni, director of Research for Africa at CeMiSS.

The presentation of the book "Perspectives 2014" was also a moment of discussion and discussion on the main geopolitical issues that are characterizing our planet, identifying the trend lines with which national and international decision makers will have to compare.

The meeting was divided into a general overview of the year that has just ended and the events related to the first months of the 2014. Subsequently, in the vast panorama of the changes taking place, some areas and issues of interest for our country (Balkans, Iran and Central Africa) were analyzed, capturing the most characteristic elements of current or potential crises, with a prospective and pragmatic vision on the development of events.

Almost all the CeMiSS collaborators were present who, in 2013, contributed to the strategic monitoring of events and to the drafting of the volume. The event was attended by representatives of the institutional, academic, diplomatic and military world as well as a large group of scholars and researchers with whom CeMiSS normally discusses and collaborates.

At the end of the presentation, the Chief of Defense Staff, Admiral Luigi Binelli Mantelli, spoke and illustrated how the military leadership stands in the current context:

"The military hierarchy makes sense because we must, and we are obliged in some cases, to demand of our personnel sacrifices that other organizations do not ask for. Therefore the military hierarchy, regardless of the choices ... is fundamental in order not to waste the responsibilities. Today we, in this country ..., we see a progressive dispersion of the clear line of responsibility, which is command for us. Command means having the means, men, but above all knowing how to assume the responsibilities. If this does not happen then it is It is true that leadership needs to be changed. The military is the first to start talking about leadership, in unsuspected times, where manageriality was spoken. Managerialism means knowing how to manage, leadership means having a vision, being able to follow. it is clear that if legislative, financial and economic interventions lead to watering down the sense of the military hierarchy, the Armed Forces lose their fundamental abilities. "