The incoming migrants welcomed by the military of Safe Roads 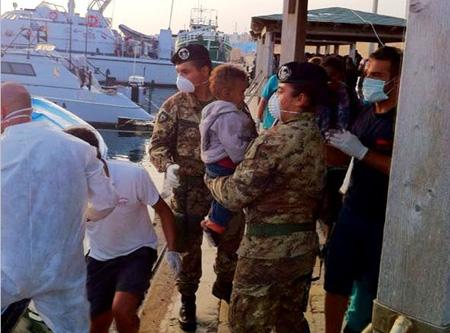 The army soldiers, employed in Lampedusa as part of the "Safe Roads" operation, welcomed 354 immigrants (including 118 women and 27 children) to the Favarolo pier, aboard a boat escorted by the coast guard.

The migrants of sub-Saharan origin have been rescued and have been promptly received on the quay by the army personnel of the Safe Roads operation; among the military there are also the cultural mediators of the army.

The task of cultural mediators, in addition to ensuring the safety of the First Aid and First Aid Center, is also to provide assistance to immigrants. The contribution offered to immigrants and, consequently, to rescuers has often proved to be indispensable in order to avoid dangerous situations.

Military personnel operating in Lampedusa are placed in the Western Sicily Safe Roads group under the command of Colonel Marco Buscemi.

Also this year the Army participated with an information stand in the well-known event dedicated to the world of comics, the...
218
Read

In recent days, the "Mangusta 22" exercise, an activity that the "Folgore" paratrooper brigade carried out ...
1411
Read