Home News armed forces Terra The students of the 235th course of the S... 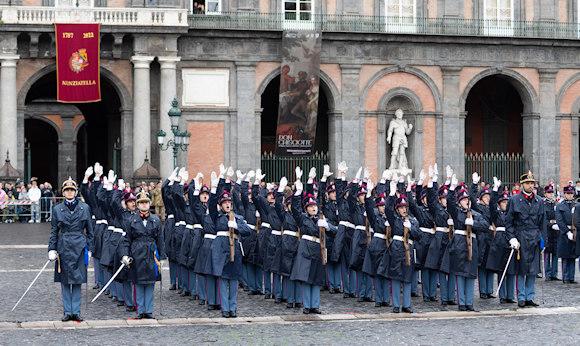 In Naples, in Piazza del Plebiscito, this morning, the students of the 235th course Gold Medal for Military Valor Captain Raffaele Tarantini have taken the Oath of Loyalty to the Italian Republic, in the presence of the Army Chief of Staff, Army Corps General Pietro Serino, accompanied by the Commander for Army Training, Specialization and Doctrine, Army Corps General Carlo Lamanna.

The ceremony was attended, among others, by: the mayor of Naples, Dr. Gaetano Manfredi, the prefect of Naples, Dr. Claudio Palomba, the president of the National Association of Nunziatella alumni, the lawyer Giuseppe Izzo, the general commander of the Carabinieri, general of the army corps Teo Luzi, the Combatant and Armed Associations, other military and civil authorities including diplomatic representatives, the Judiciary, the University, the Regions, the local authorities and other Administrations.

The solemn oath, which took place in the presence of the Institute flag and the godfather of the course, army corps general Gold Medal for Military Valor Rosario Aiosa, was sealed with the reading of the traditional formula of the oath, pronounced by the commander of the Military School "Nunziatella", Colonel Giuseppe Stellato, sanctions the full entry of the 46 students - 32 men and 14 women - into the ranks of the Italian Army.

During his speech, the Chief of Staff of the Army exhorted the young students: "Always carry with you the commitment you solemnly assumed today. Love and respect our institutions and you will be the citizens Italy needs. From this moment you have become part of the great family of the Italian Army: the Army of Italians, at the service of the Institutions and citizens”.

General Serino then went on to underline that: "Italian is the only adjective that can be associated with the Army, because in these 161 years we have always and only fought by serving the national tricolor, the one you swore by". The event, broadcast in live streaming on the internet portal and on the Italian Army's social platforms, allowed relatives and friends, unable to participate, to share such an important act in the student's life with their loved ones.

The Italian Army, through a public competition announced annually, offers the possibility to all boys and girls who have successfully completed the second year of classical and scientific high schools to continue the three-year period of studies at military high schools. The Military Institute of Naples guarantees a vast and profound preparation, particularly attentive to the completion of all the educational programs foreseen by the MIUR, including in the training course disciplines that favor the process of ethical - moral, cultural and physical training of the students through the application of a code of conduct inspired by military rules. The transversal nature of military culture is presented to students as an educational platform onto which values ​​and knowledge necessary for the development of skills that will be usable in any context are grafted.

The "Nunziatella" Military School is confirmed as an undisputed national excellence, which trains young people who annually integrate the cadres of both the military and civilian world as men of culture, industrialists, diplomats, politicians but, always and in any case, citizens specimens.

The international exercise 'Cerces 2022' has ended, which saw the participation of a unit of the brigade ...
3967
Read

The "agreement for the collaboration...
288
Read