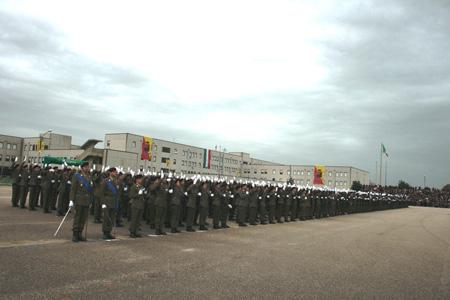 Last Friday, in Capua, 670 One Year Fixed Volunteers of the 17 ° Acqui Training Volunteer Regiment of the 4 Block 2013 took an oath of loyalty to the Italian Republic.

At the ceremony, which took place in the Piazzale “G. Antonucci "of the" Salomone "barracks in the presence of the War Flag of the Regiment, decorated with the Military Order of Italy, a gold, three silver and one bronze medal for Military Valor, was attended by the Commander of the Group Training Units of the Army, Brigadier General Gabriele Toscani De Col who, accompanied by the Commander of the Regiment, Colonel Iginio Junior Ramundo, reviewed the troops. During the ceremony, which was attended by the Prefect of Caserta, Dr. Carmela Pagano, the Bishop of Capua HE Most Reverend Monsignor Salvatore Visco, the Deputy Mayor of Capua, Ing. Gaetano Ferraro, as well as numerous representatives of the Combat Associations and d 'Arma, General Toscani, addressing the jurands, affirmed that with the sworn oath you have formally committed to fulfilling, with discipline and honor, the very high role of servants of the land of our fathers - the homeland - of its institutions and its people , of our people. The Army fully relies on you and on your motivational drive and welcomes you with open arms to provide the wards with the youthful lymph, vital for our institution. The Regimental Commander, Colonel Iginio Junior Ramundo, instead declared that today more than ever it is believed that young people are not inclined to assume obligations and duties, and instead, to deny the many prophets of doom, 670 young people are lined up in front of you in arms that have freely chosen to give their word, in a solemn and ritualized form, to fulfill specific obligations and adhere with courage, intimate conviction to a real lifestyle that will characterize them for the future. block 4, formally acquired today the status of Volunteers in Fixed Station for one year, they will conclude the basic training period in the coming weeks to be then transferred, on February 2013, to the operational units of the Armed Force ".

From 5 to 18 September 2022, the “Folgore” parachute brigade participated in the multinational exercise “FALCON ...
7435
Read