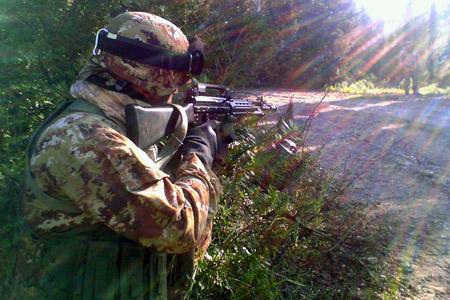 The marshals students of the course '' Patria '' have played, the 26 and 27 last June in the polygon of Torre Veneri (LE), the exercise "Open Eyes 2014", specialty training for the exploring branch.

The activities carried out during this specialized training followed a progressive development that, starting from a theoretical phase and then continuing with a series of practical activities, led the non-commissioned officers to reach a patrol amalgam that allowed them to adopt suitable operating procedures to operate adequately, in full decision-making autonomy, in a reference operational context.

In the exercise, which represented the final act of the specialist path for the exploring function, the non-commissioned officers tried their hand at training in terrestrial tactical exploration procedures (ETT) in the field of exploration, surveillance and acquisition of objectives (Reconnaissance Surveillance Target Acquisition - RSTA), which represents the culmination of the specialization phase carried out at the Institute.

The specialized procedure ended with the realization of a continuous exercise, centered on the use of an exploring cavalry patrol in the conduct of a mounted exploration activity, in hidden form "by stealth", both in daytime and at night, finalized to the collection of information data.

To make the activity even more real and operational, the use of OPFOR units contributed to simulate the presence of opposing forces, creating a series of activations to test what was learned by the visitors during the theoretical phase.