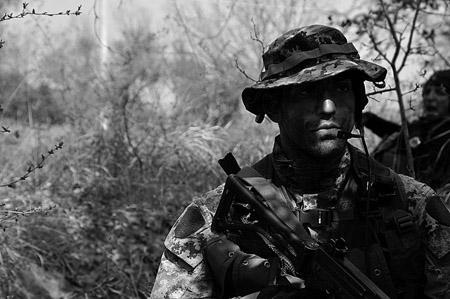 The complex exercise for the evaluation and validation of the Initial Operational Capability of "Savoia Cavalleria" as a unit of paratroopers ended in the Maremma.

In a simulated scenario of an international crisis the Folgore departments exercised for about 10 days in the operational activities typical of the paratroopers units on the ground such as for example territorial control patrols and combat patrols, surveillance and supervision of sensitive targets, but also in the command and control procedures of the command staff.

In particular, the start of the activities of the "Savoia" took place through the operational launching of the first parachute riders, also integrated by the use of vehicles and materials such as the Cagiva motorcycles supplied to the Department and which are widely used for this type of Unity.

The exercise was also a very important test to test the acquired capacity for cooperation between all the departments of the Folgore brigade among which, in addition to the 8 ° regiment genius guillatori Folgore, all newly acquired or the Savoia Cavalry (3 °), the 185 ° artillery paratroopers and the 6 ° logistic regiment.

In short, it was an extremely realistic exercise and, given the training results, highly profitable.

"Savoia" has passed with flying colors his first challenging exam under the "Folgore", taking an important step towards its complete evolution in the parachutist cavalry regiment.

These continuous exercises also allow to carry out a careful control of the territory, especially in isolated areas and little frequented: some illegal landfills have been identified and plaques of stolen cars have been found.

The international exercise 'Cerces 2022' has ended, which saw the participation of a unit of the brigade ...
4136
Read