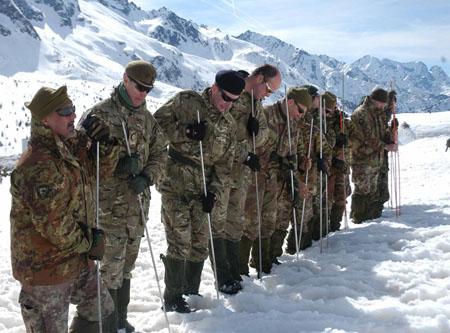 The exercise "Eagle Snow Master 2014" ended last Saturday: more than a hundred officers, non-commissioned officers and graduates, men and women of the 15 countries allied with NATO Rapid Deployable Corps Italy (NRDC-ITA), participated from 15 to 22 in March to the exercise at the Tonale pass.

The training activity ended with an exercise that also included the use of helicopters.

The activity, very important from the point of view of military training, is also fundamental to consolidate the spirit of body and the harmony of the NATO command staff with a strong multinational connotation.

"Today the multinational command honors the fallen of a hundred years ago. Here in the mountains, with the sacrifice that unites everyone in difficulty, we find the spirit of the body to bring the prerequisites of peace and security through great professionalism ", declared NATO commander Rapid Deployable Corps - Italy, general at the end of the ceremony. of Giorgio Battisti army corps.

The international exercise 'Cerces 2022' has ended, which saw the participation of a unit of the brigade ...
4139
Read