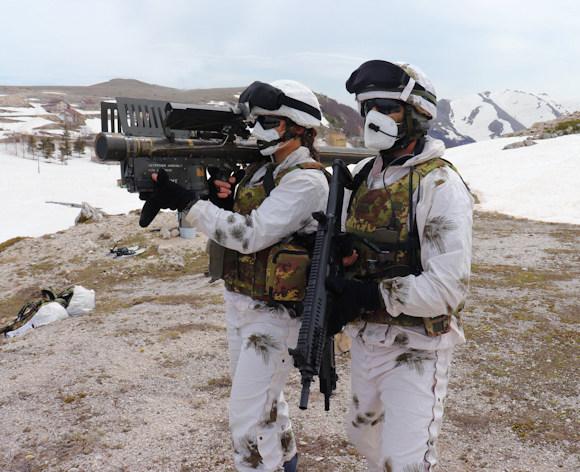 The exercise in the mountain environment of the STINGER units of the 17th "Sforzesca" counter-aircraft artillery regiment, one of the most complex training activities organized and conducted by the V / SHORAD (Very Short Range Air Defense) department of the Anti-aircraft artillery command (COMACA) of the Army to test and increase the intervention capabilities of the very short range weapon system in extreme use situations.

Held in recent weeks between the Apennine peaks of the Ernici and Simbruini Mountains, Campo Staffi and the Filettino area (FR), the activity, which is part of a training cycle that embraces various environments, saw the military of the "Sforzesca" work , at the helm of Colonel Daniele Reale, struggling with skins and snowshoes, an unusual challenge for the Pontine department which faced gradients of over 1000 meters, pulling the STINGER weapon system with a total weight of about 35 kilograms and makeshift shelters ready to spend the nights in the open, highlighting the ductility of the anti-aircraft weapon system capable of skilfully deployed in less permissive environments.

The purpose of the exercise was to test the ability to guarantee anti-aircraft defense at very low altitudes, in adherence to maneuvering units operating in a mountain environment, with a harsh climate and articulated morphology, as well as always maintaining a high level of readiness of the COMACA forces. , in full compliance with the rules for limiting the spread of CoViD-19.

The STINGER surface-to-air missile weapon system, used against the air threat conducted at very low altitudes, consists of the missile, the launch tube, the power supply unit and an identification system.

For training purposes the weapon system has a configuration Field Handing Trainer (FHT), inert system for familiarization with the handling of the weapon, and of a configuration Tracking Head Trainer (THT), capable of simulating the entire launch sequence and assessing the degree of training achieved by the operators.

The "European Wind" exercise represents the culmination of an intense training cycle, planned and directed by ...
3326
Read

In recent days, the basic mountaineering course was completed in favor of two reconnaissance platoons of the 173rd brigade ...
7603
Read

With the ceremony of delivery of the green beret and the winged lion, symbols of the youngest specialty of the ...
5562
Read

The "Trident Maris 2021" exercise conducted by the anti-aircraft artillery departments of the ...
1351
Read

In recent days, at the "Scianna" barracks in Palermo, the combat training module that saw ...
1024
Read