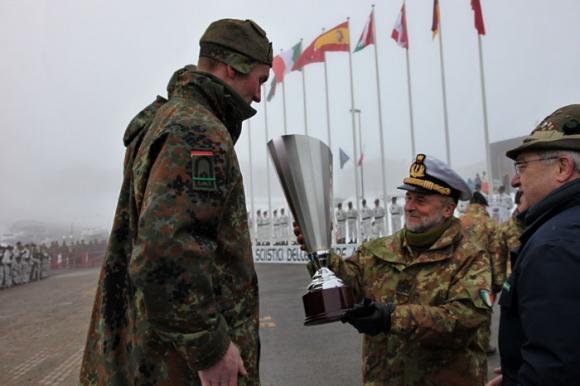 With the assignment in the afternoon of the "Alpine Gold Medal" Trophy to the 8 ° regiment, winner in front of the 4 ° and 5 °, the turning off of the tripod and the flag-off in Piazza Mercato, the Championships officially ended today 2014.

Among the foreign representatives, Germany won the "IFMS" Trophy (International Federation of Mountain Soldiers), also finishing second behind the Army Sports Center in the "Friendship Trophy".

An edition characterized by an important presence of participating countries (13 in addition to Italy), and because after more than a decade the event has left the Alta Val Pusteria (BZ) to rediscover its original itinerant spirit and a Piedmont that does not saw from 27 years.

General Primicerj's thought went to all the participants who animated the event and thanked him "we were honored by the participation of so many representatives of allied countries and friends, of international Commands and training institutes: the comparison with experiences so different and specific can only expand our professional background as mountain soldiers. "

In addition to the Mayors of the Municipalities belonging to the Mountain Union of the Milky Way, the Undersecretary of State for Defense, Senator Roberta Pinotti, the Chief of Defense Staff, Admiral Luigi Binelli Mantelli and the Chief of Staff of the Army, General Claudio Graziano who underlined "in a moment of transformation and also of rationalization in which training and efficiency become priorities, we must focus on operations and supporting these events means supporting the will to be operational, to look after substance and to best express our abilities. " The General thus concluded, before declaring the 66th edition of the Alpine Troops Ski Championships officially concluded: "The mountain is a severe environment in which more and more all specialties have had to learn to operate and its ideals bind all the Alpine Units of the world"

Large participation and enthusiastic comments also this morning in Pragelato, where the Alpine troops demonstrated to the Authorities present and to the mass of their abilities in knowing how to move and operate in a winter mountain environment; the Black Pens of the 2 regiment of Cuneo have simulated a combat action following an ambush.

Commenting on the demonstration, the Chief of Defense Staff, Admiral Luigi Binelli Mantelli, reiterated that "the CaSTAs are an important training moment and for the Armed Forces training is essential to reduce risks".

From 5 to 18 September 2022, the “Folgore” parachute brigade participated in the multinational exercise “FALCON ...
7411
Read

It took place yesterday morning in the “G. Perotti ", in the presence of the commander of the Land Operational Forces of ...
1062
Read