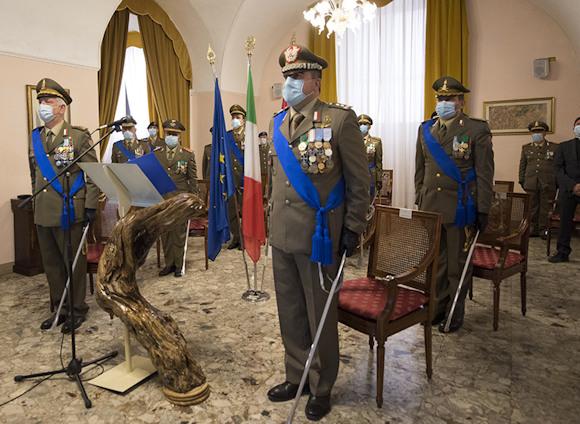 Yesterday in Sassari, at the “La Marmora” barracks, the alternation ceremony in the command of the “Sassari” Brigade between the major general Andrea Di Stasio and the incoming colonel Giuseppe Levato.

At the ceremony, held in compliance with anti Covid measures, in addition to the participation of a restricted representation of the staff of the brigade command, was present, via videoconference, the commander of the "Acqui" division, division general Nicola Terzano, who praised the work done by Dimonios in these years. In his farewell speech, General Di Stasio, after paying respectful homage to the war flags of the regiments of the "Sassari" brigade, a heartfelt thought to the fallen in carrying out the service and a heartfelt thanks to Sardinia and its institutions, retraced the main stages of the nearly three years spent at the helm of the brigade, including, in the homeland, the leadership of the Lazio-Abruzzo group in Rome as part of the "Safe Roads" operation and, abroad, the command of the operation "Leonte XXVIII" as part of the UNIFIL mission.

Equally important was the contribution provided by the “Sassari” brigade on the island during the health emergency, in particular in the fight against and prevention of the pandemic.

General Di Stasio concluded the speech with words of deep appreciation and gratitude towards the Sassarini and underlined the importance of the links existing between the brigade and Sardinia: “During these years of command I realized the unique peculiarity of this brigade, one of the souls of Sardinia. It is one with the island that hosts it, with which it lives in synergy and represents, even historically, its characters. Therefore, at the end of this wonderful period, I feel a feeling of very strong attachment to the brigade and of love for this land ".

General Di Stasio, destined to take on a new prestigious post, is replaced "in vacant seat" by Colonel Levato, former deputy commander of "Sassari" since September 2018, as well as commander of the detachment of the brigade in the period in which it was deployed in Lebanon . An infantry officer, from Rome, Colonel Levato boasts numerous experience in command and staff at national and international level.

Abroad he was employed at the NATO headquarters in Brussels and took part in missions beyond national borders in Bosnia, Lebanon, Afghanistan and Iraq.

The "European Wind" exercise represents the culmination of an intense training cycle, planned and directed by ...
3657
Read