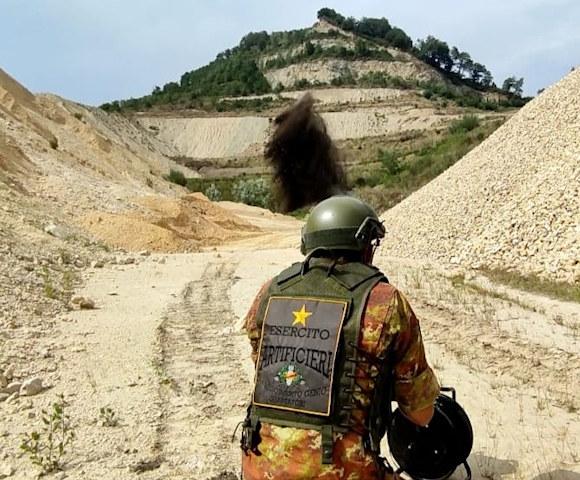 During 2021, the engineering departments belonging to the COMFOP Sud area of ​​competence carried out, at the request of the prefects, 369 reclamation interventions throughout the territory of central and southern Italy, destroying 835 weapons of war and carrying out one of the most delicate tasks and important ones of the Army in the context of the security of the civilian population.

Most of the time, these are dangerous remnants of war from the Second World War, including aircraft bombs, hand grenades, rockets, mines, artillery grenades, ammunition for small arms and explosives.

The sappers of the 21st genius of Caserta, a regiment belonging to the “Garibaldi” brigade, defused 433 artifacts, found in Campania and Calabria and in the provinces of Latina and Potenza. Particularly significant were the interventions in Acerra (NA), where a 250 pound British aircraft bomb was found, in Camposano (NA), with a 50 kg German aircraft bomb and in Avellino, where it was eliminated a 100-pound US aircraft bomb. During the three reclamations, reinforcement works were carried out to contain the effects of any explosions, which allowed the local authorities to reduce the range of evacuation of the local population.

In Sicily, the 4th sapper engineers regiment of the "Aosta" brigade destroyed 279 bombs in 79 interventions, including that of Castelbuono (PA), in which one was found Shrapnel 120 mm Austro-Hungarian, artillery shell dating back to the First World War.

All the EOD (Explosive Ordnance Disposal) cores of the sapping engineering regiments, during the reclamation operations, acted by implementing every safety procedure to always preserve the safety of people and goods.

It ended in recent days, between the limestone walls of the "Budinetto" of Cala Gonone (NU), in the National Park of ...
5657
Read

The army and air force begin to give life to the man-aircraft combination, from which the "Blue Specialties" of the ...
5755
Read