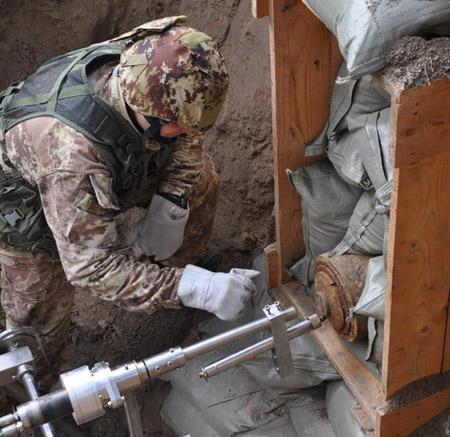 Yesterday, in an agricultural area near the outskirts of the municipality of Fossalta di Piave, the EOD (Explosive Ordnance Disposal) operators of the 3 ° regimental genius regiment of Udine, a dangerous bomb, a war remnant of the first world War.

This is an Austro-Hungarian bomb in fairly good condition.

The operations, which lasted for a few hours, were carried out in several phases because, first of all, it was necessary to create an expansion chamber in the ground to contain the effects of an accidental explosion, to then place an apparatus inside the excavation to carry out the abrasive cutting of the bomb.

At the end of the cutting operations, the bomb was emptied of the explosive subsequently destroyed together with the fuze. Subsequently the land was restored to its original state.

The activities, carried out under the coordination between the prefecture of Venice and the Northern Interregional Defense Forces command of Padua, were directed by Lieutenant Colonel Stefano Venuti and involved, besides the bomb squad, technical and health personnel of the genius Regiment to guarantee both health care and the necessary excavation work.

The 3 ° genius guastatorium regiment of the "Pozzuolo del Friuli" cavalry brigade of Gorizia, is one of the 7 Units of the Corps of Engineers charged with reclaiming the territory of central-northern Italy from the numerous war residues still existing and dangerous. In 2013 i nuclei of EOD specialists of the Third Genio Regiment have carried out 462 remediation interventions for a total of 1137 unexploded ordnance and, in the first quarter only 2014, have carried out 37 interventions. "dual-use" connotation, operate in favor of the national community both with the remediation of war remnants still widely present on the national territory, and in the event of public disasters, as recently occurred on the occasion of the snow and flood emergency in Veneto and Friuli Venezia Giulia.

The international exercise 'Cerces 2022' has ended, which saw the participation of a unit of the brigade ...
4135
Read