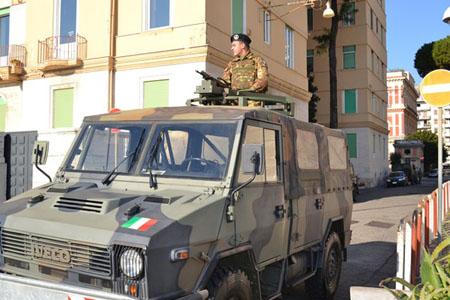 As part of the "Safe Roads" operation, there is a positive balance of the "Cavalleggeri Guide" regiment (19 °), of the "Garibaldi" brigade, engaged in the control of metropolitan areas in competition with police forces in Campania; in particular, for the collaboration in police operations that led to the arrest of some robbers.

The last intervention took place in the afternoon of 15 last March, in Piazza Plebiscito in Naples.

On this occasion, two young engaged couples have asked for help from the "Guide" patrol, which is stationed in the square, because just before they were attacked and kidnapped by an immigrant.

The soldiers intervened promptly and on the basis of the description made by the two boyfriends they arrested a person who was identified and subsequently handed over to the police.

The person was recognized by young boyfriends as the author of the robbery, so the police proceeded to arrest thanks to the solicitude shown by the army patrol.

The "Guides", are in command of the grouping "Campania" from 28 November of 2013 for the territoriality of Naples and Caserta.

In this period they carried out, in synergy with the other police forces and with the coordination of the 2 ° Command of the Defense Forces of San Giorgio a Cremano, about 2000 checkpoints and route about 200.000 km. in the area of ​​responsibility.

This operational commitment recorded a very positive balance with the sequester of about 8 kg. of light drugs, 3 guns and 663 cartridges for pistols and rifles, moreover, 56 people were reported for various crimes and were handed over to the police for the procedure of arrest 8 robbers.

The international exercise 'Cerces 2022' has ended, which saw the participation of a unit of the brigade ...
3967
Read

The "agreement for the collaboration...
287
Read