Centennial Bersagliere at the 11 ° regiment 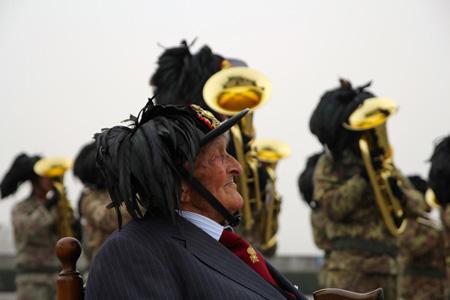 The bersagliere Davide Santin, class 1914, decorated with the Silver Medal of Military Valor, on his hundredth birthday, returned to the "Leccis" barracks of Orcenico among the plumed infantry of "his" 11 ° regiment in whose ranks he had the honor of a military man.

Santin was welcomed by the bersaglieri of Aries who tightened around their "comrade" with the enthusiasm and affection typical of the specialty and participated in the flag-raising along with his family.

With this ceremony, simple in form but full of meaning, the 11 regiment wanted to re-embrace its bersagliere, whose presence will remain engraved in the memory of who, today on arms with the same feathers and with the same motto "QUIS ULTRA? "Continue to serve the country in arms.

Distinguished by heroism on the Yugoslav front in December 1942, Santin received the prestigious decoration in the field, ratified later by decree of the President of the Republic in 1949.

The motivation states: "Replacing the machine gunner who fell during a clash with the enemy near Rubcic, Croatia, he was able to contain the impetus of the assailants with the firing of his machine gun even when, all the fellow soldiers around him fell, he was himself injured in several parts of the body. The effectiveness of his defense allowed the Bersaglieri to fall back on more suitable positions. Only after about 24 hours of strenuous defense Santin, retiring last, reached them, taking with him the weapon and other materials that he did not intend to leave to the enemy. "

At the end of the Second World War, Santin, like so many Italians who responded with honor to the call of the Fatherland embracing arms, put these in their memories and with hard work he worked helping to realize the context of values ​​and freedom that we live today, keeping the spirit of the bersagliere and the link with his military experience.

The international exercise 'Cerces 2022' has ended, which saw the participation of a unit of the brigade ...
3972
Read

The "agreement for the collaboration...
289
Read

The Baptism ceremony took place at the "Pietro Teulié" barracks in Milan, site of the homonymous military school...
493
Read

The "Freccia" exercise, which began on 4 October last, of the Army's anti-aircraft units deployed ...
1934
Read