CIMIC activities of the Italian contingent in Lebanon 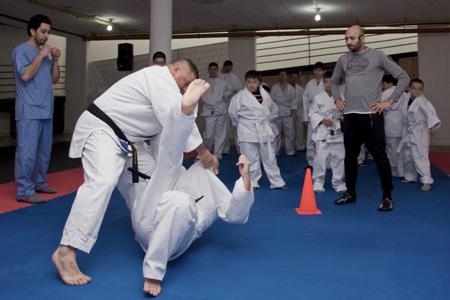 The civil and military cooperation activities of the Italian Blue Helmets continue, based on the "Grenadier Brigade of Sardinia", in favor of the population of South Lebanon.

In recent days, the staff of the Combat Service Support Battalion, for the most part made up of staff of the 1 ° Transport Regiment of Bellinzago Novarese, launched the "Muovilandia" project at the Mosan Center of Tiro, an institute for children with intellectual disabilities. , as primary objective, to teach children with disabilities, between the ages of six and eleven, the fundamentals of Judo and Karate and, more generally, those that are the basic motor gestures to 20.

A simple ceremony, presided over by the commander of the CSS Bn - Colonel Mario Stefano Riva - and by the director of the Mosan Center - dr. Mohamed Chafraddine - started the course that began with the delivery of karategi to children.

Finally, a real "joint operation" took place in the Area of ​​Responsibility of the Lebanon - South East Joint Task Force in Spain where, at the request of a Lebanese non-governmental organization (Jouzour Loubnan), the Italian contingent, the Spanish one and the French one, under the patronage of the respective Embassies and in close collaboration with the Lebanese Armed Forces, have carried out reforestation activities along the hills overlooking the Hermon chain, planting two thousand trees that will contribute to improving the hydrogeological structure and environmental of the area.

From 5 to 18 September 2022, the “Folgore” parachute brigade participated in the multinational exercise “FALCON ...
7382
Read