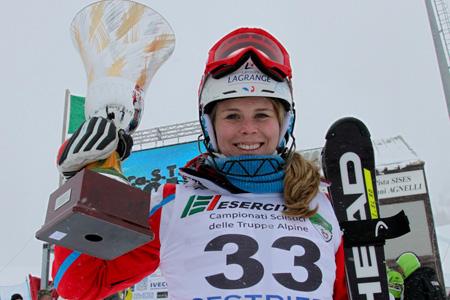 Yesterday, at the end of a special slalom test held in extremely unfavorable environmental conditions and won by the Swiss Michelle Gisin, it was the Frenchwoman Anne Sophie Barthet who won the "Truppe Alpine" Trophy, the first prize awarded during the Troops' Ski Championships Alpine.

With the fourth place achieved yesterday in the slalom and the excellent third placement on the first day of the giant, which took place on the "Giovannino Agnelli" track in Sestriere and valid for the FIS European Cup for women, Anne Sophie Barthet won the "Troops Alpine ", awarded to the best athlete by sum of times in both races. Also in the same morning, in Pragelato, Sergeant Roberto Mauro (2nd Alpine Regiment) and Corporal Jessica Brandstetter (4th Alpine Parachute Regiment) won the titles male and female champion of the Italian Army of biathlon. Second day instead for the platoons who, starting from the town of Cesana, at the end of a path of about 23 kilometers for over 1.000 meters in altitude, interspersed with a movement test at chronometer and a precision hand grenade (the topography test was canceled due to adverse weather conditions), reached the town of Claviere; the provisional classification, still very open, sees the 3rd Alpine Regiment in command and, for the foreign teams, the German representative.The ski mountaineering race, which should have been held this evening was canceled due to the pitiless weather has been shot down on Sestriere since the afternoon. In the evening, at the premises of the Local Tourist Association of Sestriere, the 9th Meeting "La Montagna" took place, the usual space dedicated to companies specialized in the production of cutting-edge technical equipment and sponsors of the Championships, which exhibit their latest innovations in newly developed materials.

From 5 to 18 September 2022, the “Folgore” parachute brigade participated in the multinational exercise “FALCON ...
7425
Read