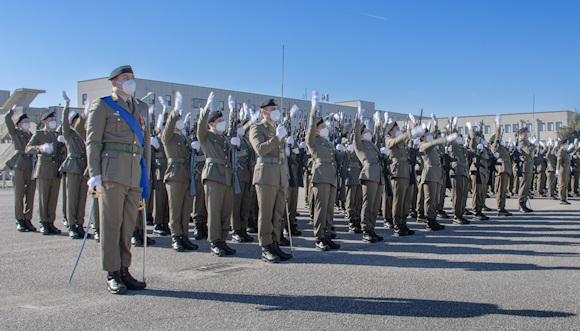 At the "Oreste Salomone" barracks, headquarters of the 17th "Acqui" volunteer training regiment (RAV), the volunteers in firm prefixed of one year (VFP1) of the Italian Army, belonging to the 2nd block of 2020, have sworn allegiance to the Italian Republic.

At the ceremony, presided over by the commander of the training, specialization and doctrine of the Army, general of the army corps Salvatore Camporeale, local civil, military and religious authorities and the families of the jurands took part. In the presence of the glorious War Flag of the Regiment, the volunteers sealed the solemn act of the oath by pronouncing the traditional formula and singing in unison the Hymn of Mameli, performed by the Fanfare of the Bersaglieri Brigade "Garibaldi".

“You have solemnly pledged to dedicate the best of yourselves to Italy. I am sure that you will be loyal and conscientious soldiers, irreproachable and disciplined servants of the state and exemplary citizens ", were the words of General Camporeale addressed to the young soldiers of the 2nd block 2020.

The regimental commander, Colonel Francesco Maione, during his good wishes speech urged the jurands to continue to lavish the same commitment that characterized the training period spent at the 17th RAV “ACQUI”. The training of military personnel, in which the Army invests important resources and employs highly qualified instructors, allows young recruits to learn the rules governing the military organization, to achieve adequate physical preparation as well as to acquire the knowledge and skills basic and combat specific to each soldier.

In the coming days, the volunteers of the 2nd block 2020 will leave the city of Capua to reach the units of the Armed Force, located throughout the national territory.