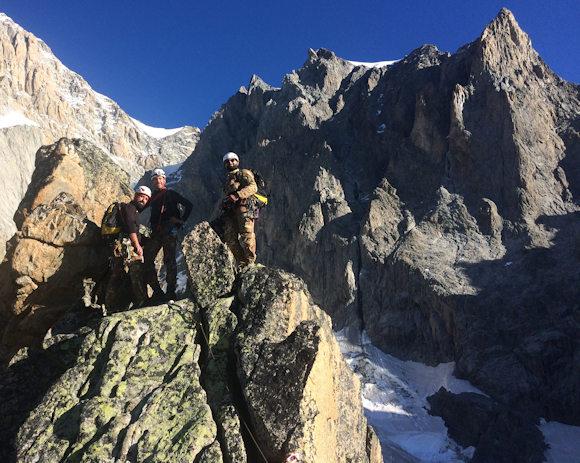 In recent weeks, at the "Tempesti" Village training logistics base in Corvara (BZ), the 2nd Mountaineering Qualification Course during which 24 neo Military Mountaineering Instructors of the Army underwent a selective 4-week qualification process.

The particular training process included two phases: the first dedicated to movement in the mountains (held in Valle d'Aosta) and the second focused on movement on rock in the Dolomite terrain.

In the first weeks of the course the candidates had to demonstrate excellent aerobic training, good ability to move with crampons on ice, ability to pass a climbing pitch of 6 A + "on sight" and to know all the maneuvers of rope which are learned in basic and advanced military mountaineering courses. The training, in this first phase, took place on the Mont Blanc massif, which represents the ideal "mixed" environment for deepening knowledge on high mountain terrain and for increasing the ability to move safely. The alpine ridges and glaciers put a strain on the students who were engaged in training simulations at high altitude, in the command position, under the careful supervision of the instructors of the Alpine Skiing Section of the Alpine Training Center.

With the start of the second phase and the consequent transfer to the Dolomite area, the staff experimented with verticality on some of the most famous walls in the world, where more than 100 years ago the Alpini showed proof of their ability and courage.

Most of the new instructors come from the Alpine Army troops, but the training offer of the Alpine Training Center it is often also addressed to operators of the Special Forces sector of the Army and other Armed Forces.

Inside the Court of Honor of the Military Academy and in the presence of the commander for training, ...
233
Read

The Cavalry of the Italian Army originates from the Savoy cavalry in which the first regiments of order "...
237
Read

The 5th Engineers Regiment, unit stationed in Macomer framed in the Sassari brigade, which has its origins in the ...
242
Read