75 years of "Lightning and mighty" 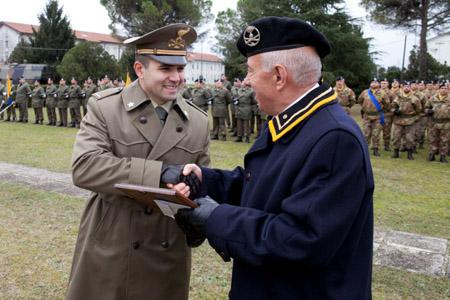 In recent days, at the "Ettore Baldassarre" Barracks in Maniago (PN), in the presence of the Combatant Associations and Weapons, the armored artillerymen of the 132 ° commemorated the 75 anniversary of their foundation.

The 10 February of 1939, in that of Rovereto (TN), was constituted, under the command of Colonel Menotti Chieli, the 132 ° Artillery Armored Regiment "Aries", which, starting a few months later, would help to write the glorious pages of history that saw protagonists all armored of Aries in North Africa, culminating with the battles of El Alamein.

During the ceremony, the regional delegate of the National Artillery Association of Italy, presented the ANARTI 2013 Award to Marshal Pietro Semonella, for the results obtained during his specialization training process.

The 132 ° Regiment has participated, in its modern history, in all the main operations on the national territory and abroad and, currently, it is used with a unit equipped with the extremely modern PZH2000I self-propelled in the package of high readiness forces called Joint Rapid Reaction Force (JRRF).

The "European Wind" exercise represents the culmination of an intense training cycle, planned and directed by ...
3671
Read

In recent days, the basic mountaineering course was completed in favor of two reconnaissance platoons of the 173rd brigade ...
7729
Read

With the ceremony of delivery of the green beret and the winged lion, symbols of the youngest specialty of the ...
5586
Read

It ended in recent days, at the PACUB (Combat Training Course in Populated Centers ...
1412
Read