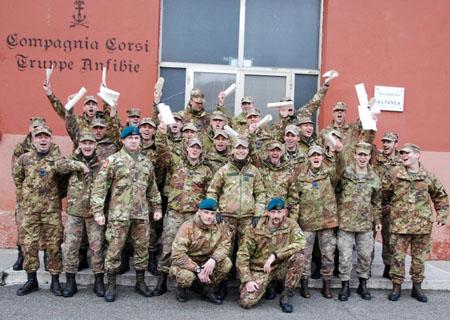 In recent days, at the "Serenissima" Lagoon Regiment, the amphibious 53 course ended after five weeks.

During the training period the students coming from the 3 ° Regiment Genio Guastatori of Udine, 17 ° Regiment Artillery Contraaerea of ​​Sabaudia and from the same Lagunari Regiment (wards inserted in the basin of the "National capacity of projection from the sea"), conducted the demanding tests typical of the selective lagoon environment without the respite of a favorable climate.

The most demanding tests include: buoyancy tests, ballasted gears, swimming fords with heavy weight, tactical descent with the "fast rope" technique and theoretical evaluations on amphibious doctrine. During the ceremony, the commander of the "Serenissima", Colonel Massimiliano Carella, patented the staff by delivering the amphibious qualification certificate to the new "amphibians".

The "European Wind" exercise represents the culmination of an intense training cycle, planned and directed by ...
3658
Read