Home News armed forces History The War in the Pacific: The Battle of the ... 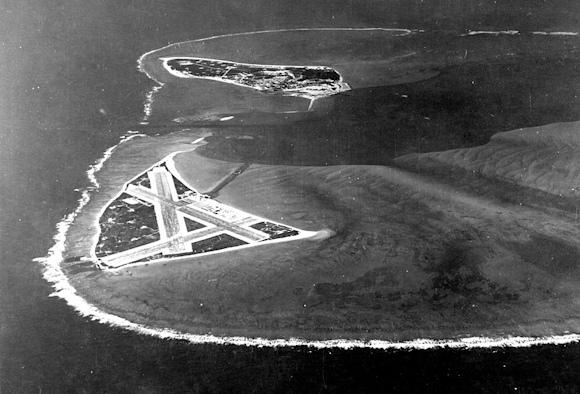 Between 4 and 7 June 1942 near the Midway atoll the myth of the unbeatenability of the Japanese empire was shattered. From then on, fortunes in the Pacific would change in favor of the Allies.

After the Tokyo attack (April 1942) carried out by 16 bombers led by Colonel James H. Doolittle, the Japanese imperial army and navy considered it necessary to prevent these events from happening again. This could only be achieved by moving the United States further east. Thus the Japanese imperial staff agreed to attack the enemy in the central Pacific.

The chosen target was the Midway Atoll (located a thousand miles from Hawaii).

Many may wonder why a small atoll became so important, but even the smallest "islet" in warfare can turn the tide of a conflict.

This atoll, which had belonged to the Americans since the end of the nineteenth century, was of very significant strategic importance from a geographical point of view. In fact, after the attack on Pearl Harbor on December 7, 1941 and the collapse of all allied bases in the central Pacific, Midway became the first US forward base in front of Japan. 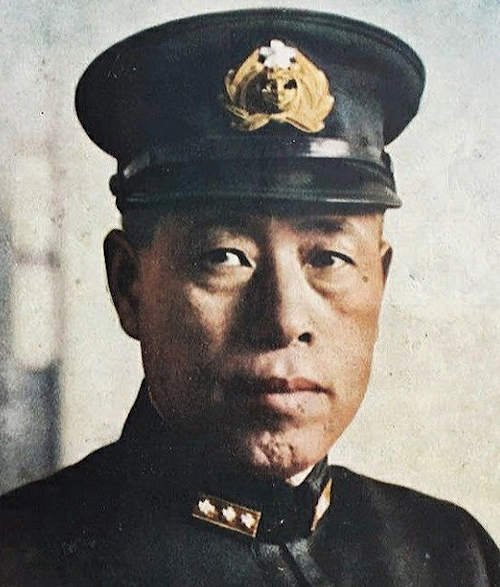 Admiral Yamamoto (photo) had the task of organizing the attack plan. It was therefore essential to create a gigantic fleet that was able to defeat the Americans.

In May 1942 the planning was finalized. In fact, the plan was to take the Americans by surprise and conquer Midway with an amphibious landing, and knock out what was left of the American fleet. What the Japanese did not know, however, is that US Navy intelligence managed to uncover their attack plans (scheduled for early June). In fact, the Americans were able to decipher the Japanese secret code. The Japanese in their messages indicated a place with the initials "AF" as the target of major invasion preparations.

Intelligence suspected it was Midway. So they decided to check: they broadcast on the radio, from Midway, a message that indicated as the "sea water distillation was damaged". Exactly the following day Japanese encrypted messages began to convey that "AF" was short of fresh water. Now for the United States it remained "only" to wait for the attack. Furthermore, in late May, the Americans learned that there would be a second Japanese invasion of the Aleutian Islands, but that it was only a diversion.

Admiral Yamamoto (aboard the battleship Yamato) personally led the attack, and set sail with the largest fleet he could muster; Admiral Nimitz would follow the operations from Pearl Harbor headquarters and direct the movements of Admirals Spruance and Fletcher (commanders of the Task force 16 and 17).

The fleet of the Japanese Imperial Navy was truly impressive and included: 11 battleships (including the Yamato), 4 aircraft carriers with almost 300 aircraft on board, about 13 heavy and 5 light cruisers, about sixty destroyers and more than 20 submarines.

The US Navy fleet was formed as follows: 3 aircraft carriers, 8 cruisers, about 14 destroyers and 20 submarines in addition to the support of the Midway and Hawaii air forces.

On June 3, Admiral Fletcher (aboard the aircraft carrier Yorktown - photo) took up position about 200 miles north-east of the Midways, ready to parry the attack.

The Japanese navy approached in three groups: to the north was Vice Admiral Naguno with all four aircraft carriers, followed by two battleships, cruisers and destroyers. The Admiral's goal was to overwhelm the Midway-based aircraft and any possible resistance that might occur from aircraft launched from, possibly, aircraft carriers in the vicinity.

Around 9:25 am on June 3, US seaplanes sighted the Japanese convoy. So the first air attack was launched from the Midways, around 12,30, with 9 bombers but this sortie was a total failure due to the distance. There was also a night attack but only one tanker was hit, without creating too many problems for the convoy of Japanese ships.

At the first light of dawn on 4 June, the Japanese aircraft carriers were about 200 miles north of the island (not noticed by anyone), and from that position they launched a hundred bombers escorted by about fifty fighters.

US planes took off from the aircraft carrier around 9 am Hornet, attacked Admiral Nagumo's naval team. At first it seemed that the American offensive led to a stalemate, but it turned out differently. 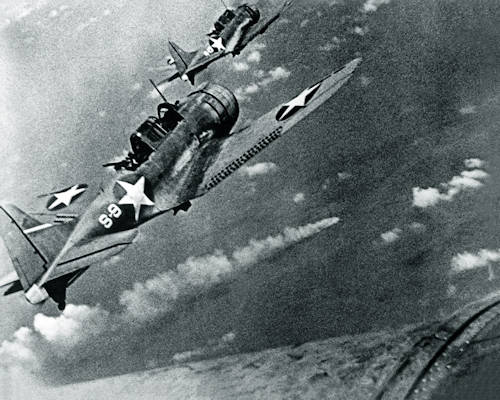 Around 10, 26 an attack conducted by 37 planes Dauntless (photo) departed from the aircraft carrier Enterprise it had devastating effects for the Japanese imperial fleet.

Later others Dauntless hit the Soryu, which sank. Only there remained unharmed Hiryu. At around 10,55 am this aircraft carrier began launching its first counterattack against US forces, hitting the Yorktown, which at 14 pm after a couple of attacks was badly damaged in such a way that there was nothing more to be done (it will sink on 45 June hit by a Japanese torpedo).

The other two American aircraft carriers, the Enterprise and Hornet, took no damage, and so were in a chance to launch a further attack on Hiryu, who went to the peak taking with her Admiral Yamaguchi, who was considered by many to be Yamamoto's possible successor due to his skillful skills. For the Japanese imperial navy it was a complete naval "disaster".

Admiral Yamamoto realized what a tragedy the loss of the aircraft carriers had been, and after signaling the general retreat, gave the order for a naval bombardment of Midway; probably to save face from the terrible defeat, and to cover the retreat. Even in this case, however, it was a failure: two cruisers (Mogami e Mikuma), of the four destined for the operation, collided after attempting to avoid a US Navy submarine. The attack plan was abandoned and the cruisers withdrew. 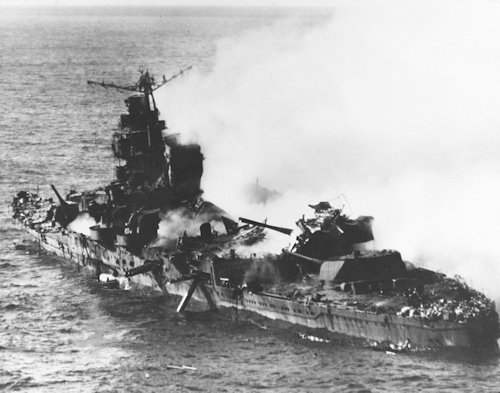 On 6 June the Enterprise and Hornet they managed to spot and bomb the two cruisers (already damaged), and while the Mikuma (photo) sank the Mogami managed to get to safety.

When the surviving fleet returned to Japan, only Emperor Hirohito and a few senior naval officers were informed of the terrible defeat.

Even the commanders of the army, for a while, were not told anything about it; demonstrating how relations between the navy and the army were very "difficult" (to put it mildly). The Japanese people, on the other hand, were told that they had achieved a victory.

The Battle of the Midways was one of those that decided the fate of the conflict in the Pacific.

The Japanese empire, after the defeat, was no longer able to take the initiative; the advantage that had been created in the beginning with the attack on Pearl Harbor was "canceled". With this brilliant victory, the US fleet, on the other hand, was able to re-establish parity with the Japanese navy; moreover, within a few years the United States would be able to deploy dozens of new aircraft carriers and hundreds of battleships (which Japan was unable to do).

The Americans, after Midway, began to "take back" the Pacific.

Oliver Warner, World history of naval conflicts. 1571-1944. From Lepanto to the American reconquest of the Pacific, Res Gestae, Milan, 2014

Nicola Zotti, A hard blow to the empire of the Rising Sun, in The great naval battles, Spree, Cernusco Sul Naviglio, 2019

Among all the battles fought by Napoleon, that of Borodino, or otherwise called by French historiography ...
4159
Read

The battle, also known as Capo Spartivento, represents one of the first Italian responses to the "Taranto night" ...
4473
Read

In the first days of November 1942 the decisive attack of the British forces against the now disastrous ...
3955
Read

In the late 50s many nations both in Western Europe and beyond the Iron Curtain were conducting studies ...
13950
Read