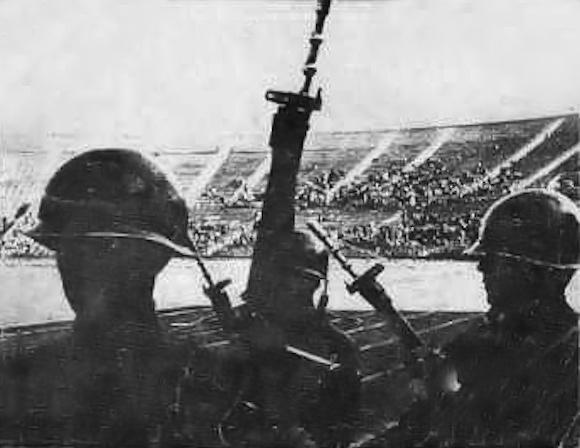 The Chilean coup is the violent outcome of a match, the most important moves of which were all made by the conspirators before the last one, on 11 September 1973.
There are several rivers that have led to the coup d'état sea. One, perhaps the most important, is from the United States.

In 1973 in the midst of the Cold War, Henry Kissinger, national security adviser to American President Nixon, is convinced that in Chile it is necessary to avoid a new Cuba in two senses, to boycott any political formula, however democratic, that slips into communism (and brings the USSR in the US garden), and do so without explicit involvement of US forces. Indeed, the Chilean road to socialism of President Salvador Allende seems toAmerican eagle un Russian bear.

The US decides to weaken Allende in every way, and then allow the Chilean armed forces to remove him without further resistance. Elected in 1970, Allende is implementing a radical left-wing program, bordering on the constitution, with which to reform an elite socio-economic structure, through nationalization, wage increases, public spending. It wants to redistribute income and thus increase purchasing power and consumption. However, deficits, inflation and public debt are increasing.

The armed forces, key to both the stability of the system and its overthrow, cross their own contradictions and moves with those of politics. At the top of the military is René Schneider, convinced of the non-intervention of the military forces in politics (this is the Schneider doctrine). For this he is killed in the 70s. Allende, however, appoints another “constitutional” general, Carlos Prats, who has even become minister of defense and the interior since 1972. Any coup leaders understand that involving the military is not enough, they need to be at the top. 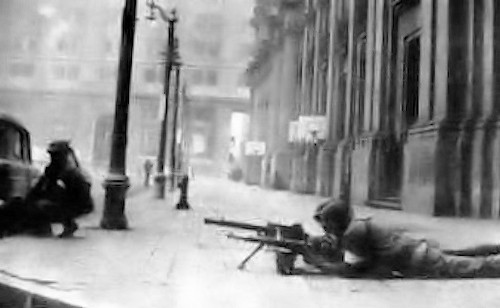 The goal becomes to discredit and replace Prats. It works. The US helps with embargoes, funding for opposition and strikes, terrorist sabotage, alarming press campaigns. The fruits arrive on August 22, 1973.

There are two lines between the coup officers. Who wants direct confrontation with the government and who, pretending to support, actually works for the same goal. The coup.

It is in this perspective that the failed coup d'état of the tanks of June 29, 1973 (il Tanquetazo - photo), which Prats manages to suffocate only when General Augusto Pinochet induces the coup leaders to lay down their arms.

How much Pinochet was already planning his future coup d'état or how much he was still extraneous to subversion, is not clear, but with this move he manages to establish himself as a loyalist of Prats and Allende.

The situation degenerates with the protest of the wives of the officers in front of the Prats residence, on 21 August. They see him as a leftist traitor. Prats on August 22 meets the committee of generals and asks them for an official note of support, but only six out of eighteen support him (among these there is ambiguously Pinochet).

Prats would maintain command only by exonerating the others, but it would be civil war. He therefore resigned to Allende, suggesting Pinochet as a replacement. Of the six generals who supported Prats, Mario Sepúlveda Squella, commander of the military square in Santiago and Giullermo Pickering, director of the military institutes, became aware of a coup mechanism and resigned in solidarity with Prats. However, Allende trusts and appoints Pinochet commander in chief of the army. In one day, three of the most important loyalist generals leave the scene and the most ambiguous one reaches the top. The same day the Chamber of Deputies voted, denouncing the illegality of the government and offering the armed forces the formal device necessary to make a coup appear as a defense of the constitution. The context is now favorable to the coup. 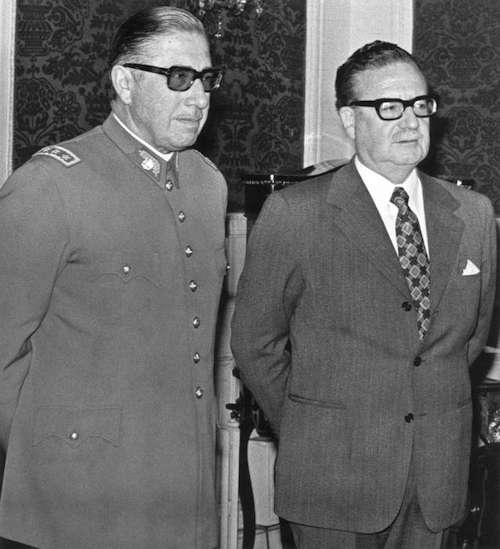 Pinochet is contacted by the coup directors (Generals Leigh and Arellano Stark and Vice-Admiral Merino) on 8 September. On 9 September Pinochet joins. Since when did you agree? From the Tanquetazo, or just the last one? All the previous moves accredit, if not a convinced planning, at least an ambiguous and skilful intention to favor the best conditions for a coup d'état, of which eventually to be part of.

The action takes place on September 11, for two reasons. The troops are already in Santiago to celebrate the day of glory of the army on 19 September and above all because it commemorates 11 September 1924, the day of the inauguration of a military junta theorising the "manifest destiny" of the armed forces.

It all starts around 5.30 in the morning. Allende sleeps in his residence. Pinochet is in the telecommunications command of the army. From there he guides every move. The commander of the naval squad in Valparaiso orders his ships to breach the city's port. It is the preview of the occupation of the whole east coast. The prefect of the province warns Allende, who immediately tries to contact all the commanders, but the information arrives fragmented - at the same time as the coup, the silent operation was triggered, the annihilation of every radio and TV. Allende seeks the Navy commander, Admiral Raul Montero, a loyalist, but immediately imprisoned.

The new commander of the Navy is José Merino, the commander of the team from Valparaiso, coup leader of the first hour. The air force commander, Gustavo Leigh, does not answer, and above all Pinochet does not answer. Allende considers him a loyalist and therefore has been arrested. The director of the carabineros answers him, treacherous to them, he is trusted, José Maria Sepúlveda, who reassures him, will send reinforcements to the Palacio de la Moneda, seat of the Government, but a few moments later Sepúlveda is arrested and replaced by César Mendoza, inspector general of the carabineros, installed at the Central de Comunicaciones de Carabineros.

From home it is impossible to do more. Allende brings together the GAP, groups of friends of the president, is a bodyguard made by volunteers of the socialist youth for his own protection, precisely because he does not trust the carabineros. With them he rushes to the Moneda, guarded by the carabineros, who still do not stop him. This is also why Allende believes that there are loyalist forces and that it is only necessary to contact and coordinate them. He does not know that Santiago itself is in the hands of General Arellano Stark, the real architect of the capture of the capital. The university center of Concepcion also fell, from which the extreme left could have organized some resistance. Thus Santiago and Concepcion, the lungs of any defense, are suffocated.

Reaching the building, Allende understands the extent of the facts when the armed forces issue a joint statement at 8.30, in which they say they have taken control of the country and order the president to resign. Having heard the press release, i carabineros della Moneda decide to leave. It's 9 in the morning. Allende refuses and through radio Magallanes, the only one still not silenced, sends a last message of resistance.

It is now 9.45 am, the infantry assault on the presidential palace begins, but they collide with the resistance of the gaps. At 10:20 radio Magallenas is also silenced. After hours of fighting it will be Leigh, at 11.50 am who will unblock the situation by ordering the aerial bombardment of the building. At that point Allende decides to end the extreme resistance through suicide, which he makes with the AK 47, which Fidel Castro gave him.

At 14 pm the coup d'état took place. That same day, the National Congress and the National Court are dissolved. A military junta is formed made up of the three commanders of the armed forces, plus the new general director of the carabineros, respectively Pinochet, Leigh, Merino and Mendoza.

This junta subsumes in itself the executive, legislative and constituent powers. A state of siege and an internal state of war are declared.

That what was being established was a military regime and not an offshoot of a civil power, albeit a conservative one, is understood by the President of the Senate Frei, when his military orderly goes to talk to the members of the junta, convinced that the constitution was still in force and that, once the president is dead, it was up to him to call the elections. He gets nothing and at the exit he can no longer find his institutional car. The Senate no longer exists. A simple one carabineer points to a taxi ... he understands that the civil power can not help but step aside. The night of Chile has begun.

Among all the battles fought by Napoleon, that of Borodino, or otherwise called by French historiography ...
4160
Read

In the first days of November 1942 the decisive attack of the British forces against the now disastrous ...
3958
Read

In the late 50s many nations both in Western Europe and beyond the Iron Curtain were conducting studies ...
13956
Read