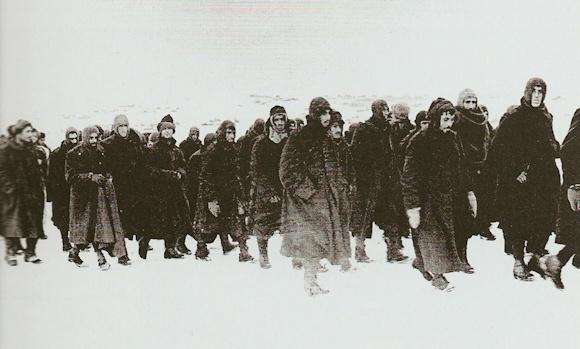 Life, for many authors, is a scenic representation; there is no canvas, it is the course of events that attests the roles, which gives each event its nature. The story is made up of episodes: comedians, grotesque, more often dramatic, with main performers, supporting actors, choruses of extras who, though innocent, pay their blood tribute; war is often directed, with a screenplay written by the characters that characterize every people. 79 years ago the tragic opened with its prologue and put1 of the Russian Campaign, the only one capable of generating, between the events from 40 to 43, a significant and not always disinterested literary volume; the fact that in '41 there are publications on Bolshevism, and that the veterans then continued with memory already in '46 -'47, he induced the collective imagination to a clear vision of the Countryside, fueled by a bipolar and frontal political opposition, according to a publicity that has not always done justice to the complexity of the conflict.

From a point of view scientific, the Italian war is part of the little investigated and therefore difficult to judge critical issues; until relatively recently, with rare exceptions, many aspects of operational activities remained in the shade. What is certain is that, relatively to theUSSR, Countryside, and especially imprisonment, they have become arguments with different meanings depending on who was their spokesperson, and that over time stereotypes have been created that wanted to remove, not always with full reason, the icon of the Italian soldier from that of the German counterpart; the representation of the Italian good people it was the fulcrum of the distance from the former ally, functional to the creation of a post-war national identity, supported by desertions that did not allow the return to the homeland, from the retreat on foot in the frozen steppe, from tens of thousands of deaths and often from the inhuman experience of captivity, in contrast with the forecasts of the general staff who, predicting a brief conflict, did not understand that a system of values ​​was ending on the Don. 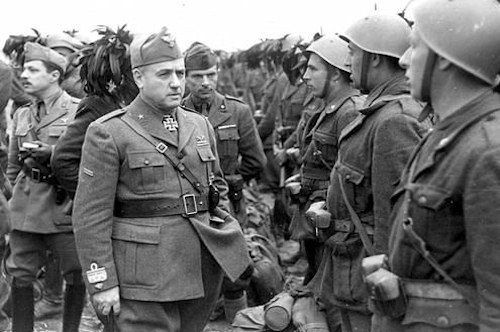 It is General Messe himself, the only Italian strategist on the field, to say in July '43, once captured by the New Zealanders, who ..We are generous, we ... we don't know how to hate. Our soul is made like this, so I have always maintained that we are not a warrior people, a warrior people hates ..

The theme of Italian participation in the invasion of the USSR cannot be traced back to an ideological tendency: for Italy, penetration in the Balkan area constituted an imperial project to which the war did not change the substance and conferred a concrete meaning in which the Italic intentions collided with the German ones.

Germany never revealed what the plans were for the territories that fell under her rule, much to force the Italians to seek, until the end of the operations, useful information on the German intentions, one curiosity more than legitimate, given both the methods ofConnection of '38, and those of the Molotov-Ribbentrop Pact of '39, situations recommended by Mackinder, who feared the birth of a Russian-Russian supremacy within theheartland, capable of increasing an Atlantic maritime power; a prediction that the war has delayed but that now, after more than 70 years, could slowly take shape with the formation of the Moscow-Berlin axis.

The operation Barbarossa, which excluded Italy but co-opted Romania, Hungary and Finland, therefore materialized the German will to appropriate theheartland, Ratzel's living space to dominate central and western Europe; however he retraced the paths of the Napoleonic campaign of 1812 which, as in the 40s, exalted Russian patriotism: the principle Aleksandr Nevskij could have remembered that whoever comes to Russia with the sword dies with the sword, and that underestimating the enemy can be counterproductive. 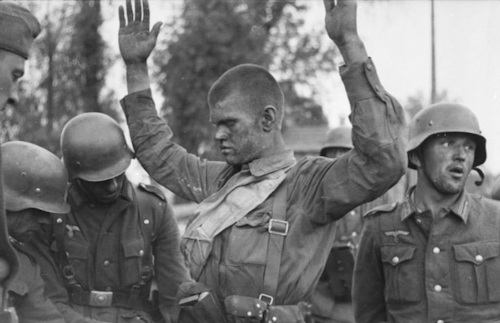 The front line runs from the Baltic to the Black Sea; the initial Soviet losses are very high; Italy joins the company, and despite German reticence, sends CSIR2, under the command of General Giovanni Messe who, while organizing the best available forces, cannot conceal the unpreparedness in terms of quality and quantity of armaments, of means of transport, of logistics; once Kiev fell the Soviets counterattacked and retreated by exploiting the depth, the approach of winter, and thus decreeing the beginning of the end for the invading armies. Stalin orders the defense to the bitter end of Moscow, the German advance stops.

Meanwhile Messe communicates to Rome in what situation the troops are in, so as not to hesitate to resort to purchases unconventional3 in Romania, in order to support its forces, without the necessary clothing for the imminent winter; Messe has the courage to support the need to solve the logistical problem. What arrives from Italy is insufficient, puts the North African front in crisis, where adequate supports do not come, and where Germany is forced to commit Rommel's Afrika Korps.

In 42 Messe reiterated to Mussolini that sending other quotas would have constituted an unsustainable price for Italy; Mussolini, already in difficulty since '41, replies that the 200 of the Army will weigh much more at the peace table than the 60 of the Csir. 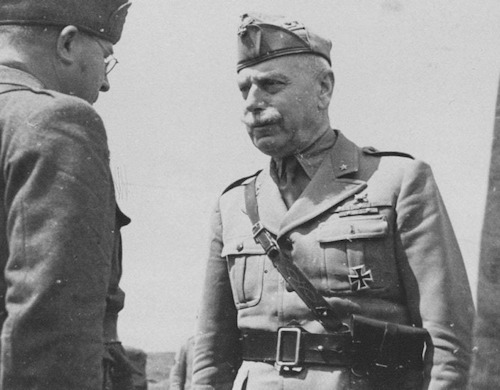 On 2 June '42 Armir was born4, 229.000 men poorly equipped, but functional to compensate for the political fear of an Italian ouster in favor of the other allies; the Army is not entrusted to the excellent Messe but to General Gariboldi (photo), towards whom the judgment of history will be merciless. G. Bedeschi, in One hundred thousand ice cans, underlines the absurdity of the top decisions, with the example of Colonel Pietro Gay, removed by Mussolini in December '42, guilty of having criticized the use of an army corps Alpine nella zona flat of the Don.

There is no shortage of acts of heroism as in Isbuscensky, where the last real cavalry charge led by the regiment is staged Savoy: the Germans congratulate them on an action they are no longer trained for, meaning that they are outdated tactics.

In Stalingrad, in September, the battle begins which, in deciding the fate of the invasion, makes the Germans discover that suffering spares no one, not even the elected; touching the last letters of Reich soldiers from the besieged city. The deployment of the Axis is shattered under the hammer blows of the Red Army, and the German backwaters now appreciate the Italian contingents.

Hitler rejects any armistice hypothesis; at the outbreak of the Russian offensive of little Saturn, on December 19, '42, in the Don valley, the Italian troops were given the order of folding: the retreat of Armir began.

Had there been Xenophon would have written the catabasis, the tragic return of the remains of an Army that, unlike that of the 10.000 Greeks, will not find thalassa, the sea, but the death or the marches of the davaj5; January 26, in Nikolajewka, Tridentine, Julia, Cuneense they engage in battle against the Soviet troops: between four and six thousand soldiers die. 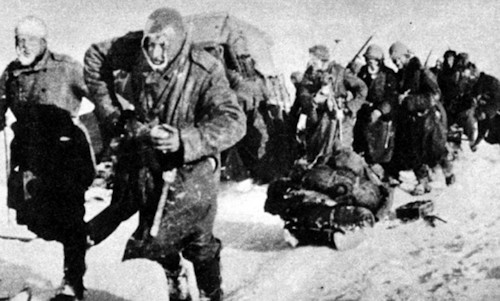 Of 229.000 men sent to Russia, 29.690 were repatriated for injury or freezing, the survivors were 114.485; of the 84.825 missing, 10.030 were returned by the USSR; of the 74.795 missing, many died in concentration camps, according to the PCUS archives. The last prisoners were freed in 1954, after being detained both under pretexts and thanks to the vile informations of other prisoners; only since 1990 were the exhumations started from Russian field cemeteries.

Guareschi, ne Comrade Don Camillo, when Brusco is caught looking for his brother's burial, he will have Don Camillo say: “those who have had twenty million fallen in the war cannot worry about the fifty or one hundred thousand deaths that the enemy left them at home ". And Brusco will reply: "But I can't go and tell this to my mother!".

Those who return to Italy find a country close to the political crisis of 25 July.

ARMIR was the turning point in Italian-German relations, both for the accusations made against the Italians for the collapse of the Don front and for the attitude towards the ally: if until the retreat there had been a suspicious camaraderie, after the collapse of the front, revealed a feeling of hostile intolerance towards the Germans; however, a more careful analysis revealed several examples in which Germans and Italians held the same behaviors, induced by the hard logic of survival6. 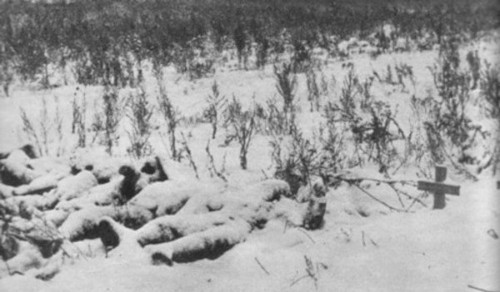 The withdrawal from the Don caused a psychological impact such as to arouse first anti-German feelings, then to allow to conquer the first floor in the debate between leftists, military and conservative circles. Beyond a difficult return, the veterans constituted a problem for the national government, engaged in the reconstruction of the internal fabric rather than in repatriating prisoners, whose political ideas were however still to be verified.

For the prisoners of the USSR, it was the Soviet authorities who delayed their return, especially that of the officers, fearing that their stories, in 46, could influence the referendum consultation against the Popular Democratic Front. In '47, with the XNUMXth De Gasperi government and the removal of the social communists, the theme of prisoners began to be used as an electoral function, until it reached the letter from Togliatti to Vincenzo Bianco, found in 1992, and proved to be artfully manipulated.

To the sergeant Scudrera of Giulio Bedeschi, the conductor of the convoy that brought him back to his homeland requires that he not be seen by telling him .. "What alpine or non-alpine! But do you see yourself? ... do you realize yes or no, Christ, what are you sucking? "; in the 70s de Sica brought Giovanna (S.Loren) to Russia in the 50s, in search of her husband Antonio (M. Mastroianni) who was lost in the war, and now linked to a Russian woman who saved him from freezing.

In short, the Russian campaign, for a long time, remained latent, but alive, in the national conscience; we doubt it can still be. Easy to forget the critical moments, modern society removes any asperity, even at the cost of killing for the third time men who have already been condemned by superficial homeland first, and then by Soviet bureaucracy.

I dedicate this article to the memory of General Enrico Reginato.

6 General Eibl, commander of the 21th Panzerkorps on 43 January XNUMX was killed by the explosion of a hand grenade thrown by the Alpini against his command vehicle, probably mistaken for an enemy vehicle