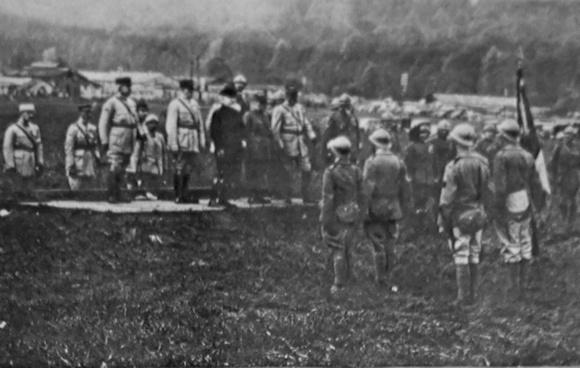 When in March 1918 Lieutenant General Alberico Albricci received the order to leave for France, that is to say for the western front, all the powers involved in the conflict were aware that immense movements of troops, on both sides of the front, they will try to end the game.

The main power factor at stake is time. The Germans have won on the Eastern front, since March the Russian steamroller has imploded and defeated, the war on two fronts, the German nightmare of the crushing of Germany vanishes, but with it the even worse one, the final defeat, does not vanish. The exterminated Russian masses are in fact being replaced by the American ones, unprepared, but fresh, and above all in the process of unfolding more and more numerous on the more difficult front, the Western one. For the Germans, therefore, one front is closed, but the weight of the other doubles.

Germany must rush, most of the German military device deployed to the east is heading west to overwhelm the allies, before the Americans can make a difference. So on the one hand, the allies would like more time to have as many Americans as possible at the front and as much trained as possible. They have to resist, earn months. On the other hand, the Germans cannot give it to him. They have to win, and the only way is to do it quickly. 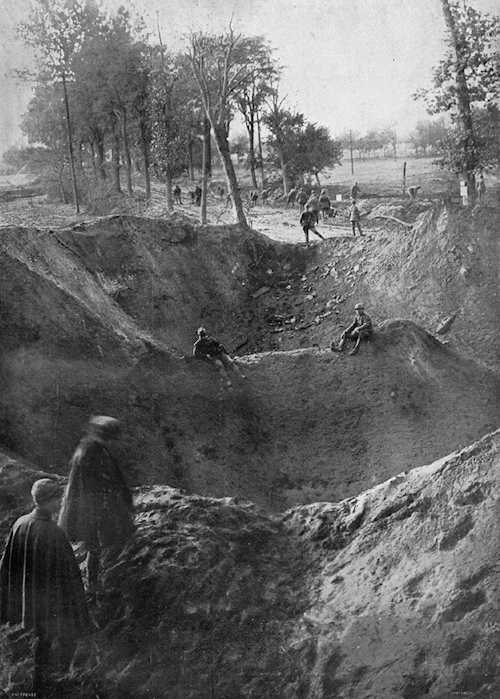 The clash promises to be titanic. The allies can only appeal to every military fiber that their system possesses, including the Italian one.

Both the Prime Minister Vittorio Emanuele Orlando and the Chief of Staff Armando Diaz are convinced that giving help to the allies is necessary both to reciprocate the one given to us to consolidate the Piave line after the military disaster of Caporetto and for reasons of prestige, related to the idea that it would be the first time that the Italians as a nation (not the past and present volunteers) would have rescued an ally beyond the Alps. As Albricci will have to say to his troops "... with flags unfurled, as equals ..."

Then there is obviously the retro-thought that the extreme difficulties of the allies on that front can reduce the perception of the extent of the Italian defeat at Caporetto and at the same time show that our soldier was not the one in the portrait made by Cadorna in his bulletin. , but he would have proved to the Franco-English and against the Germans that he was worthy of a great power.

The point, however, becomes how much help to give to allies. Caporetto, despite every attenuation, has nevertheless been there and the Italian army, bled to death, is consolidating a precarious defensive line on the Piave. Every man would be indispensable, but the political-military need prevails to be there where the German clash promises to be decisive.

She will be the mother of the German offensives, desperate and poignant as is the Germanic soul. It is called Kaiserschlacht (battle for the emperor). On 21 March, General Ludendorff launched the German troops in Picardy against the point of connection between the British of the Fifth Army and the French. Above all, however, against the British, still in possession of remarkable offensive skills, unlike the French. They advance 45 km, the Allied losses amount to about 300 men. The British 5th Army is annihilated. A huge victory, but one that remains tactical. The Germans do not really break through, on the contrary the allies coordinate with a new single command entrusted to General Foch, who solicits the arrival of the Italian soldiers. These depart on April 18th.

Albricci has at his disposal the II Army Corps, the “Glorious Corps of Kuch and Vodice”, formed by the third division (Naples and Salerno brigades) and the eighth division (Brescia brigades, and especially the Alps). Between 25 and 40 men. 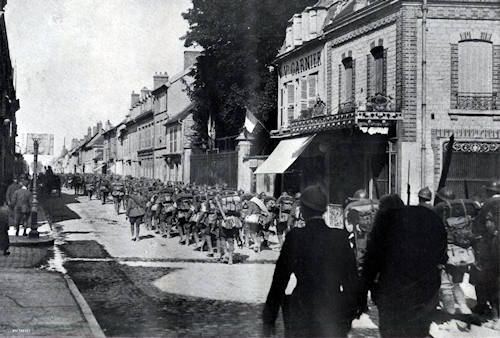 The Alpi brigade is the most "rhetorical", in the sense that it serves not only to fight but to remember: the brigade is the heir of the Risorgimento Hunters of the Alps Garibaldi of 1859, that Garibaldi who goes to fight for France against the Prussians in the war of 1870. It also serves to remind the French of Peppino Garibaldi's Garibaldi legionaries who in 1914, before our entry into the war, were already fighting alongside the French (the department is called 4th régiment de marche du 1er étranger).

The troops of the II Corps are therefore not the first Italians of the Kingdom of Italy in France, but the first fighters in the name of Italy. In addition to the legion, the Italian TAIFs were already active in France, Italian auxiliary troops in France, about 80 men unable to war and prepared for those productive, logistical and technical services necessary to free French men to be sent to the front. One third of this contingent is actually capable (or declared as such) for war and will be a reserve of the incoming second corps. Another 14 work in internal France, in factories. They are old and really unable to fight.

So until the arrival of the II Corps we already have a role, but with the official intervention we take on a profile. It will be necessary to give substance to this profile, that is blood and victory, because despite the exaltation of the French press for the returning Garibaldians, the French cultural approach is quite hostile to us. The president of the French council Clemencau himself considers the Italians a people of manpower, which contributes little to the overall effort of the Allied war - our "minor" effort forces us to send even the 1900 class to the front, which the French, even in the hours more dramatic are never forced to do, being able to count on the entire British armed forces to support the territory and in the future also on the American ones. 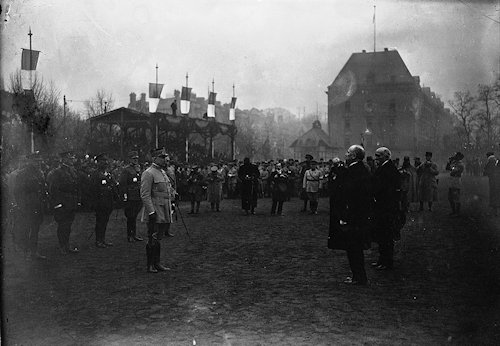 But Clemencau is not the only one, for the French we are initially macaroni caporettisti, cowards. The very material conditions of the stay are difficult, our soldiers pass from the Italian censorship on the post to the French one; moreover, the Italian salary is penalized in the exchange with the French currency, losing 40 per cent of the purchasing power.

The II Corps is set up for training in the Ardennes. Here, in fact, the war takes on dimensions unknown to the Isonzo and Dolomite front. Here the gases, the aviation, everything is used in qualities and quantities unknown to our men. They must be trained before starting. They are then deployed in the Argonne. It starts with minor operations in a fairly quiet sector. But Albricci offers more, because it is the Germans who "demand" more.

After the first blow, Ludendorff believes he can finish mangling the British, concentrates on Ypres and in May he also attacks the French between Reims and Soissons. The French risk not holding up. The Italians intervene. In particular they throw themselves to defend Épernay, in front of the most advanced salient of the Germans, Chateau-Thierry.

Épernay serves to maintain possession of the road junction that links the French capital to Reims. Simply fundamental.

The British also intervene to contain the German advance, and all together manage to repel it. We are in June and the defensive victory is echoed by the Italian victory of the Solstice (2nd of the Piave) on June 22-23, where the value of Italian weapons redeems itself and makes fellow soldiers in France proud. 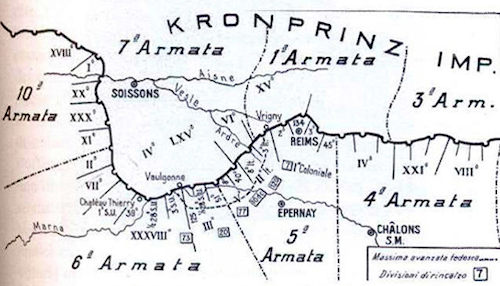 The Germans, however, still have a breath in their bodies, they attack one last time in Reims, on July 15 the second battle of the Marne begins and the Italians defend the valley itself. They are forced to make a very heavy sacrifice to stop them. One third of the army corps is lost. On 18 July, however, Germany now knows that there is no passing.

Above all, Germany has consumed time, the Americans are ready, the Allies are fighting back in September. In October, the Italians take part in the conquest of the Chemin des Dames, the Germans retreat, but this result costs the first another 2 men. It is October 1, at the end of the month and beginning of November in France we learn of the Austro-Hungarian collapse in Vittorio Veneto. The armistice of 4 November at Villa Giusti opens up the possibility for Italian troops to cross Austria to attack towards Munich, Germany is forced to move the Bavarian mountain troops, among the best Germanic ones, to the area, also contributing in this way, the Italians, to the definitive victory on the western front. On 10 November, the Italian and French troops hoist their flags on the left bank of the Meuse after a successful offensive. The armistice is signed on 11 November. The agreement won the war.

On the western front the Italians contributed in 1918 with about five thousand dead, who rest in the Italian military cemeteries of Bligny and Soupir. More than six thousand were injured. The II Corps participates in the victory parade in Paris (Alps brigade!). The same is destined to occupy the German Saar, to guarantee its demilitarization until the outcome of the Versailles Peace Conference. He returned to Italy on 10 August 1919.

Basically we went to France as we went to Crimea, to increase the class of our power, at the time from a small state to a regional power, in 1918 from a medium power to a large power (the vital salvation of territorial unity is added from Caporetto) . In our eternal war to be part of the great, without having the resources of the great, except the most strategic of all, the willingness to sacrifice blood, which expresses the human factor and military capacity. The Italian troops also show both in France, against the same German warlords.

We did not become a great power, but nevertheless we also gained our victory there and the victory of the allies.

In the late 50s many nations both in Western Europe and beyond the Iron Curtain were conducting studies ...
13964
Read

The 11th and 12th September 1683 takes place victoriously for the Euro-Christian forces, led above all by the king of ...
4362
Read