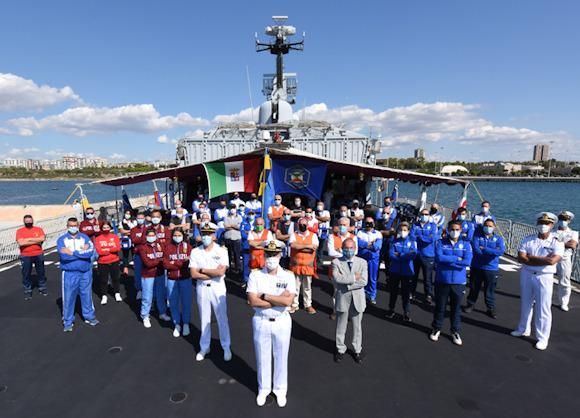 From 30 September to 02 October the Nave flight deck Francesco Mimbelli, transformed for the occasion into a real shooting range, hosted the XXVI edition of the Interforce Shooting Championship - Trap 1 specialty. For three days, 45 athletes belonging to the Armed Forces, Armed Forces and Police of the State and retired personnel challenged each other to the last target to conquer the highest step of the podium. To win the most coveted title were the athletes of the Navy sports group who ranked first in the team competition, in front of the Penitentiary Police and the Fiamme Oro team, setting the absolute record with a score of 297 targets on 300.

In the individual categories, on the other hand, the gold medals were the prerogative of the Fiamme Oro, with the assistant chief Belli Alessandro (best shooter), of the Fiamme Azzurre who triumphed in the excellence category with the assistant chief Panizza Marco. Without forgetting the "sailors" Alessandro Chianese (1st classified in the First Category) and Roberto Vivarelli (winner of the Third Category).

Among the challengers also Diana Bacosi, Olympic champion at RIO 2016 in the discipline of Skeet, who has ventured into a discipline new to her.

A sports party in uniform heralds, hopefully, an imminent return to normality, in total safety, for sports competitions.

The award ceremony and closing ceremony took place behind closed doors, in line with the limitations imposed by the DPCM on COVID, on the quay of the Mar Grande Naval Station, with Nave Francesco Mimbelli, under the command of the captain of vessel Cristo Salvatore Traetta, to act as a setting of excellence. The ceremony was attended by various civil and military authorities, including the commander of the second naval division, the division admiral Paolo Pezzutti, and the president of the Italian Shooting Federation Luciano Rossi.

Thus ends this important sporting event which, since 1995, has been conducted on the units of the naval team, testifying to a solid, fruitful and long-lasting collaboration between the Italian Shooting Federation and the Navy.

New international appointment for the rowers of the Navy. It took place over the weekend, on the waters of ...
45
Read