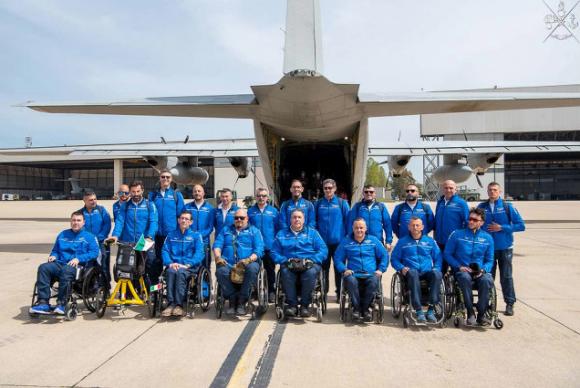 Yesterday, April 14, the Italian delegation of the Paralympic Defense Sports Group met at the military airport of Pratica di Mare for the departure for the Netherlands. To greet them at the departure for the INVICTUS GAMES, the Undersecretary of State for Defense sen. Stefania Pucciarelli accompanied by the head of the XNUMXth SMD department gen. d. Alfonso Manzo.

"I was also very keen to be here today, at Pratica di Mare Airport, to greet your departure to the Dutch capital with a military flight", so the sen. Pucciarelli, you turned to athletes and family members.

The senator then honored Team Italia with a symbolic mascot, a black panther, a symbol of strength and which clearly identifies the values ​​of the Italian delegation, with the hope that it can be a good omen for future engagements.

“Take care of it and refer to its emblematic position, for you and for all those who look to you Paralympic athletes as a coveted goal of psycho-physical recovery. You who know how to express better than anyone else that extraordinary willpower with which to overcome with perseverance the difficulties of a daily life certainly not without difficulties and also moments of discouragement. You are an example for everyone, for those people looking for greater courage and renewed strength to move forward, to overcome the obstacles of life, be they economic or social or professional ".

The gen. Manzo then first of all thanked the families for their affection and their closeness to athletes, which is fundamental in daily support. This is an important opportunity for athletes who will be able to combine their passion for sport and at the same time be surrounded by the affection of the people they care about most.

The military athletes are finally ready to go, happy, excited, some a little tense, but all surrounded by the affection of family members, children, wives and parents, and eager to live a unique experience.