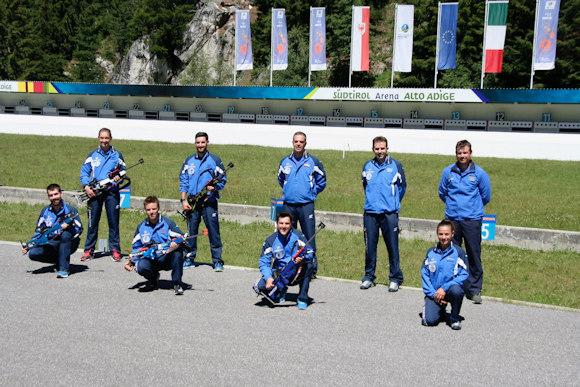 The first meeting in South Tyrol of the biathlon team of the Army Sports Center has begun.

After a period of individual training in compliance with the safety provisions, and a first meeting at the Courmayeur (AO) headquarters, the athletes of the Army team are carrying out their usual period of summer loads in South Tyrol. Taking advantage of the facilities of the fifth sports section of Dobbiaco and the Südtirol Arena, Anterselva Biathlon Center, the biathlon team meets for the first collegiate meeting aimed at technical work on shooting and roller skis while taking advantage of the natural environment offered by the Val Pusteria for walking and cycling activities.

"... For athletes of all levels it is important and stimulating to train on what will be the Olympic structures of Milan-Cortina 2026. The Anterselva range and track are avant-garde structures, used by the most important national teams on the world scene. For us it is a privilege to be able to build partnerships like the one with the Südtirol Arena " reports the head of the major competitive department Davide Dallago.

One year after the inauguration of the "fifth technical coordination section of South Tyrol" at the "Lugramani" barracks in Brunico, in the presence of the commander of the Alpine Troops general of the Army Corps Claudio Berto, the calendar of meetings of the teams of the Army and national teams have significantly thickened.

"From the beginning we understood the potential of a territory rich in structures that allow structured and professional work that has found further impetus through recent collaboration agreements with the South Tyrol Committee and with local managers." explains the commander of the Winter Sports Section of the Army Sports Center Lieutenant Colonel Patrick Farcoz.

From next week the baton will pass to the national cross-country youth team of the Italian Winter Sports Federation, which will be followed by the Army cross-country team to then continue the summer programming of the various teams that request.