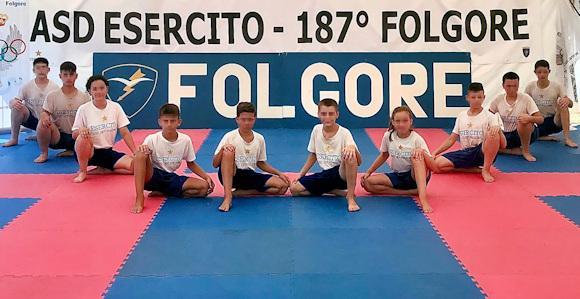 An alternative holiday that immerses you in exciting and singular experiences not necessarily limited to the children or relatives of military personnel. An offer reserved for very young people who, given the number of requests, would also seem very appreciated by their parents. These are the CLIMS international youth camps and the SUMMER CAMPs organized by the Armed Forces with limited numbers. An idea that several schools are emulating by perceiving the euphoria of students for these events that take place mainly in the summer periods.

Although the rules of social distancing post lockdown are the premise for participation, the educational initiatives of these holidays actually travel on a privileged track and with the go-ahead from the education authority.

Here, as far as the Armed Forces are concerned, in addition to a traditional sea or mountain holiday, the most elementary barracks rules are added specifically for young people but above all, in addition to the game, you can closely observe boats, airplanes, helicopters , means of various types, rather than following sports courses, learning the basic rules of orientation on the ground or the rudiments of climbing in safety from military personnel. 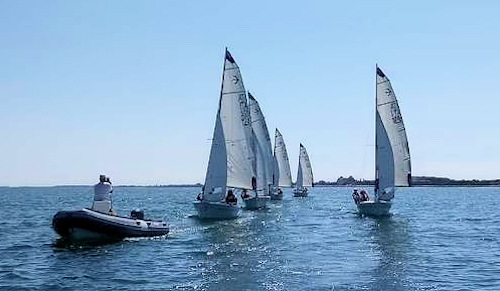 An investment, a utility, but also a way to make yourself known

The periods of stay for young people are staggered over about ten days and, in addition to practical experiences, there is an educational role imparted by the trainers based on respect, inclusion and loyalty, as in the case of the sports courses I will talk about more. come on.

In reality, as early as 29, with the young Balilla, the theme of youth recreation had been brought to the fore, but at the time the main purpose was to encourage adherence to the regime. Many years later - in 1967 - and with a very different philosophy, the Centro Velico di Caprera was born, sponsored by the Navy. It must be given the credit for being the first authoritative institution to understand the important pool of citizens interested in combining holidays and training.

The courses organized by the Defense confer a certificate, but are also a way to bring future aspirants closer to the values ​​of the Armed Forces. A prerogative of opening that also concerns the Alpine Training Center of Aosta which in the past had organized ski courses and still maintains a lively relationship on the territory even with the schools of Brunico and Vipiteno.

Worthy of note, as regards the recreational training investment of the Defense, in this case oriented towards solidarity, is the commitment of the Alpine Troops in support of FISIP, the Italian Paralympic Winter Sports Federation during the CaSTAs. A context where even the 7th rgt. Alpini di Belluno organizes white weeks for the blind by teaching them cross-country skiing. Last but not least is the historic hippotherapy activity promoted by CeMiVet of Grosseto.

All in safety with the Military Corps of the Red Cross

Not to be underestimated is the highly operational role of the Military Corps of the Red Cross, essential in many activities of the Armed Forces and civil protection to provide a further guarantee of safety to participants, athletes and those present during the events, being able to have in its structure of an enviable Sanitary Logistics excellence activated by the professional specializations of its volunteers. 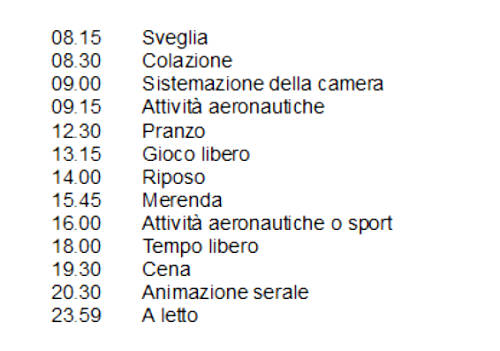 A combination that works as shown on 11a "Campogiovani" 2019 edition of the Navy which saw the participation of more than 300 young people (a few thousand since its debut in 2009). But in addition to the activities organized by PERSOMIL CLIMS - Ministry of Defense - there are also the technical institutes that do their part. As in the case of "E-STATE VOLANDO", the summer camp of the VINCI Aeronautical Institute in Gallarate which has moved its classrooms to Malpensa airport offering students the opportunity to fly a Cessna 182T on the simulator and receive astronomy, aerospace techniques, trekking and meteorology. I imagine how compelling all of this can be for kids.

For some parents it could appear as a healthy albeit brief alternative to conscription even if the conditions on the courses offered are certainly not those of militarizing a young person. However, well-known rules are followed in the barracks which we could summarize as follows (see table).

The 187th Folgore, "in the footsteps of the military athlete"

Given the brilliant results of 2002 at Italian Army Championship of Karate obtained by the athletes of the Folgore parachute brigade specialty Kumite (controlled contact combat) organized by the CSE and FIJLKAM, the concept of Amateur Sports Association, ASD, gets green light from the SMD and, in Livorno at the historic Vannucci Barracks, the name ASD 187th Folgore Army.

During a quick tour in Tuscany, my interlocutor with the stars is the cmcs qs Antonio Citi, but perhaps it would be better to call him "master". Antonio introduces me to the youth sports organization with a premise: "The youth sector promotes the project entitled" In the footsteps of the military athlete ", with the aim of proposing to the young" folgorini ", the actual" athletes with stars " at the Olympic Sports Center of the CSOE Army, as sporting and life examples to follow and to be inspired by ”. In fact, the center has the purpose of educating young athletes and perfecting their technical-sporting skills as well as developing their human and social qualities. 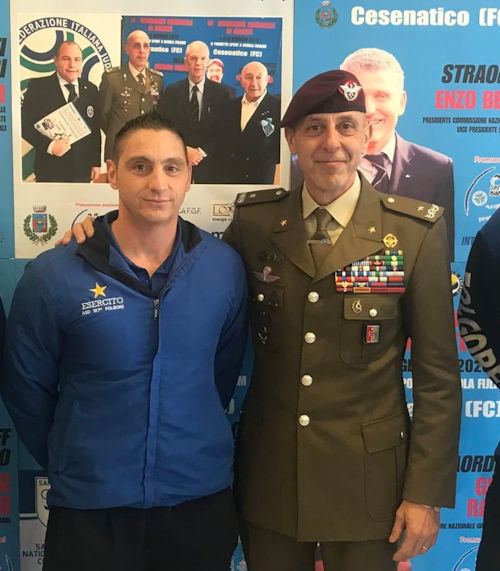 The ordinary courses take place from September to June and for this reason, thanks also to the 187th c.te, with Mauro Zandonadi who is sensitive in investing in the relationship between department and citizens, the idea of ​​creating itinerant summer courses is developed. . Thus was born the "SUMMER DAYS" which is divided into 19 days of outdoor training at the most suggestive places in Tuscany, including the Calambrone natural park in Livorno. The project Martial Multisport in addition to the sporting aspect, it has the prerogatives of making known and respecting the environment, which for a day becomes the children's dojo, but also the culture of the historic places that are affected by the courses.

After having had the opportunity to train close to the walls of Lucca with the approval of the Department of Sports, on 28 August 2020 the ASD of the 187th Army Folgore, was received by the Sports Councilor Stefano Rocchianti and the Mayor of Piombino Francesco Ferrari at the end of the lessons. I tried to get some news on the military operational curriculum of the ASD technical staff, but as you will understand here we are dealing with one of those departments that represent the spearhead of the Italian Armed Forces, therefore the confidentiality for the engagement and the missions must be respected.

The president of the ASD is the lgt. Costantino Oliviero who is joined by m.llo Daniele Pilagatti as well as the compact group of caporalmajor instructors: Citi, Parolin, Bianco to which are added the civil technicians in aid of the trips, Rico Simonetti and Vincenzo Corvaglia. But there is an exceptional name that oversees military sporting activity ...

From the Military Academy to the "tatami"

Member of the Sport School Project and national manager for the FIJLKAM, of the military sports teams, there is the current commander of the Military Academy of Modena, General Rodolfo Sganga, an athletic paratrooper who did not want to give up his passion for karate and to the constructive link with the brigade, consequently maintaining the role of technical teacher at the ASD 187 °.

In the context of "defense" I would like to include the protection of our children, not marginally, today the weakest - a bit like the elderly - and often marginalized just because they live in the suburbs. A reality cited with hypocrisy when it is necessary to make a touching propaganda and immediately forgotten.

The recent and horrible murder of Willy, the smiling and very young black boy, has morally forced me to add a block to the article by launching an appeal to the institutions. The school and the family nucleus are the basis of a civil society and, when one of the two is missing, we must ask ourselves where we have failed.

To take charge of this discomfort in his neighborhood, Scampia, there is a man or perhaps it is appropriate to call him for what he is, a Master, a teacher of life. I refer to Gianni Maddaloni, a champion of Judo but above all a champion capable of illuminating his young students with good prospects of life. Those perspectives that today's frenzy and selfishness have made a mirage for young people with fewer resources, but if you know them you understand their value. A teacher capable of communicating and understanding young people by looking into their eyes, knowing well the formative role of sport against violence.

Maddaloni in a recent interview said that the registration fee for his dojo is secondary, his first goal is to see one of his students grow healthy. Those who have not suffered in life cannot understand the value of those who trust you, but in this case the facts speak and I would like to see Gianni Maddaloni one day in the role of minister for sport.