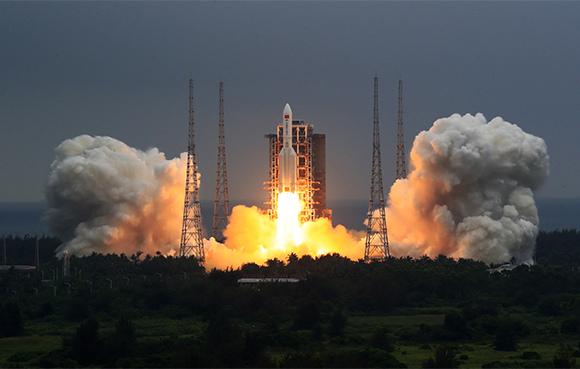 In recent days, Communist China and its space program have been the negative protagonists of world news, both for the macabre and disgusting irony on the "fire" of the rockets in Beijing compared to that of the pyres of the dead of COVID-19 in India , either because of the fall of the Chang Zheng 5 rocket (name that in Mandarin Chinese refers to Mao's "long march").

The red-orange fumes that Beijing is so proud of reveal another embarrassing secret that the People's Republic doesn't like to hear about in the media. This coloring of the fumes, in fact, is a clear sign of the fact that the rocket is powered by a hypergolic propellant of hydrazine and dinitrogen tetroxide, decidedly "archaic" as well as tremendously dangerous and polluting. To understand each other, ignition occurs spontaneously on rockets when the fuel and the comburent (in this case we must more properly speak of oxidant) come into contact.

The one based on hydrazine and dinitrogen tetroxide is a propellant used to a limited extent for the first time by the Third Reich between 1944 and 1945 and then also on the family of Titan rockets, originally in use as intercontinental ballistic missiles and then as launch vectors for many spacecraft. Later, it was used on the US Gemini and Apollo spacecraft and also, initially, on the Space Shuttle. It is also the main oxidant for the Russian Proton rocket. Today, most spacecraft have converted to mixed nitrogen oxides. Furthermore, the 'Chinese' propellant is classified as 3/3, the maximum, on the environmental risk scale drawn up by the National Pollution Inventory.

In short, it is a dangerous propellant for the insiders who have to interact with it, as well as an old type and highly polluting one, managed by a space agency, the Chinese one, which does not seem to completely obey international standards and which evidently he has not managed to make the technological leap that the frequency of space missions seems to testify.

Not surprisingly, NASA director Bridenstine commented with unusual harshness the fall of the Chinese rocket: “It flew over built-up areas and re-entered the earth's atmosphere. It could have been a huge danger. We were really lucky, in the sense that it doesn't seem to have hurt anyone ".

As with the coronavirus, Communist China continues to be silent about the fall of its rocket.