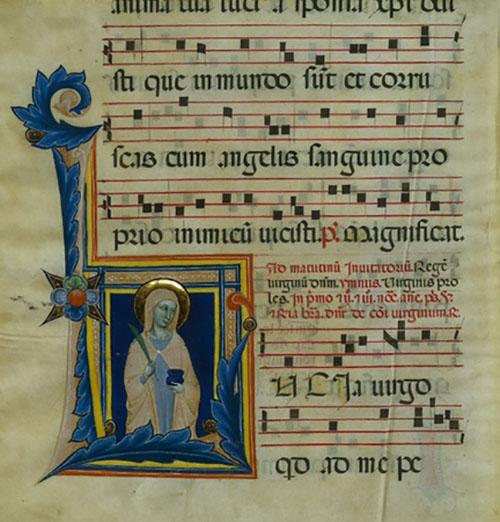 "The return of stolen works of art and other artifacts is a prime example of what ICE, the US Customs and Border Protection and foreign counterparts, such as Italian carabinieri, do all over the world to fight global smuggling organizations"ICE director Sarah Saldaña said."I congratulate the special agents of the ICE Homeland Security Investigations (HSI) who have worked closely with our colleagues at CBP to ensure that these treasures were returned to their rightful owners. "

The illuminated manuscript, known as Code D, was created between the 1335 and the 1345. On an unknown date, a page with the initial letter "L" depicting Saint Lucia was removed. In the 1952 the page was purchased, in good faith, from the Cleveland Museum of Art, after it had been incorrectly labeled. The missing page was found many years later by art historians in a catalog Online. The page will then be returned to his home country in time for the feast of Saint Lucia, the 13 December.

"This ceremony marks another important step in the long collaboration between the governments of the United States and Italy in the field of cultural promotion and protection of cultural heritage. It also underlines the continuous and constant commitment of Italy towards the repatriation of artistic treasures illegally scattered all over the world"said the Italian ambassador to the United States, Armando Varricchio."The repatriation of the '14th century Miniata Page and the' Carelli painting 'is part of the bilateral Memorandum of Understanding between Italy and the United States, recently renewed for a third time, and was possible thanks to the collaboration of the US authorities and the Museums of Cleveland and Sacramento"he added.

The painting Carelli, stolen from a private home in Naples in the 2001, was found in the 2014 in an auction house in Pennsylvania and sold to an art dealer in California. The carabinieri contacted the Homeland Security Investigations that, together with its own counterparts, the US Customs and Border Protection, led to the return of the work to its rightful owner.

"CBP is honored to have collaborated in returning these two artifacts to Italy"said Commissioner CBP R. Gil Kerlikowske."Being able to return these national treasures shows how important our cooperation and information sharing with our partners at the ICE is. Together, we were able to return thousands of antique and art objects taken from their rightful owners".

Starting with the 2007, the ICE has returned more than 30 countries to more than 7.800 finds, including paintings from France, Germany, Poland and Austria, manuscripts from the 15th and 18th centuries from Italy and Peru, artifacts from the China and Cambodia, as well as two fossils of Baatar dinosaurs in Mongolia, antiquities and objects from the Saddam Hussein period in Iraq, and more recently, ancient artifacts - including the hand of a mummy - to Egypt.

"The spirit of this event demonstrates the great collaboration that we have consolidated over the years, and I am convinced that in the future we will be able to recover other important works of art"Said the Brigadier General of the Carabinieri Fabrizio Parrulli.

Source: US Immigration and Customs Enforcement