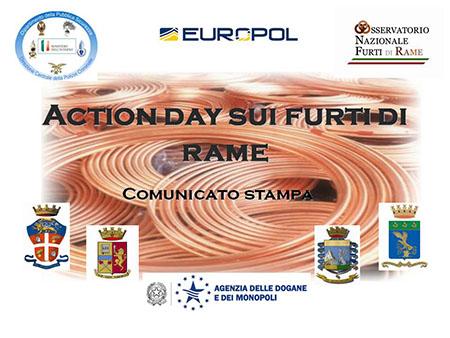 The criminal organizations dedicated to the theft and receiving of copper and other metals and the many scraps and operators of the sector that accept, often unwisely, all types of metal, received a strong warning from a day of action by the police forces held simultaneously in many European countries.

The action, which saw the Italian coordination as an action leader, by the Central Directorate of Criminal Police, took place in 16 Member States of the European Union, the 27 in May 2015, and was the result of an initiative launched at a meeting at Europol held on 19 and 20 in January 2015.

The action was developed within the priority of the Europol EU policy (EMPACT OPC - European Criminal Threats Platform - organized Crime Properties) and saw the involvement of the informal network against metal theft created during the Italian semester of the EU Presidency.

During the action day, real-time cross-checks were carried out with the Europol databases which, for the occasion, set up a coordination center where the Member States sent their own experts. Intelligence shows that stolen metal is often transported across different borders and sold as scrap, away from the crime scene. The investigations carried out during this action day will have further follow-up through the Europol analysis, in order to identify the main modus operandi and the people and gangs involved in this illegal trade.

Many criminal organizations are involved in large-scale theft of metals. Criminals and scrap dealers who buy copper cables stolen from railways, energy or telephone lines, note once again that this type of cross-border crime is seriously opposed. The crime often affects networks of transport, communication and energy supply, causing considerable inconvenience and the costs associated with the replacement and repair of damages often caused to exceed the value of the stolen metal.

The police carried out checks at the scrap shops, on construction sites, along the border roads and railway tracks. Numerous subjects suspected of receiving stolen goods have also been checked. On the other hand, moreover, during the International Conference "Network against copper theft" held in Rome on October 30 2014, it emerged that to combat and reduce this phenomenon, also in terms of crime , we must increasingly focus on cooperation and combined actions, such as "action days".

The Customs Agency has committed over 150 customs officials who have carried out 251 checks, relating to numerous import and export customs bills related to containers and industrial vehicles and minor vehicular traffic. The total quantity of copper waste and scrap subjected to customs control on the occasion of the Action Day amounts to about 900 tons. The ports most affected by exports and imports on 27.05.2015 date were Genoa and Ravenna, where 9 and 4, respectively, were sent to copper waste shipments, for a quantity of about 360 tons in the case of Genoa and 152 in the case of Ravenna. Further customs controls on copper shipments were carried out at the customs offices of Trieste, Como, Naples, Bari and Brindisi, for a total quantity exceeding 300 tons. For the preparation of control interventions in customs spaces have been conducted. The investigations are still ongoing.

Numerous arrests and kidnappings have also been carried out in other European countries. The data is provisional and, therefore, will be disclosed later.