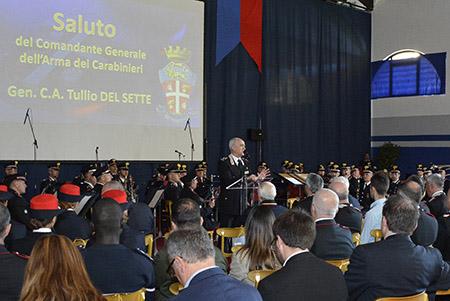 As part of the cultural initiatives related to the centenary of the First World War, about 250 students in the last year of middle school and high schools of the capital participated in a series of events organized by the Carabinieri.

The young people visited the Historical Museum of the Arma in Piazza Risorgimento - inside which is also the Memorial of the Carabinieri Caduti - where they were able to admire memorabilia and documents, reflecting the numerous and valiant actions carried out by the carabinieri in peace and in war.

The visit then continued at the "Orlando De Tommaso" barracks, headquarters of the Carabinieri Allievi Legion, where some footage of the Istituto Luce's repertoire on the First World War was shown, as well as an exhibition of uniforms and historical photographs, with a reproduction of a walkway with sentry box.

The day ended with the performance by the band of the Carabinieri of songs dating back to the First World War, and with the meeting with the commander general Tullio Del Sette, in the presence of the two testimonials of the event, the sig. na Martina Giangrande, daughter of Marshal MOVC Giuseppe Giangrande wounded the 28 April us in Rome near Palazzo Chigi, and prof. Guido Zaccagnini, professor of History of Music at the Conservatory of Santa Cecilia in Rome.

Source: General Command of the Carabinieri