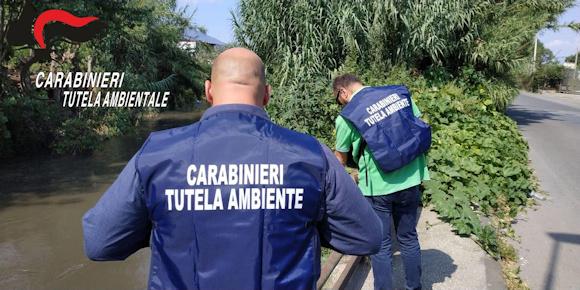 The NOE Carabinieri of Naples, during the activities aimed at contrasting the environmental crimes linked to the cycle of urban and special waste, they intensified the checks aimed at verifying situations of environmental pollution in the territorial area of ​​the Sarno river with particular reference to the industrial discharges coming from private companies and urban drains untreated, released over the river.

Numerous industrial activities are subject to control, including reports from private citizens and associations.

During the audits the NOE military ascertained that industrial waste water from a car wash, used in the work cycle, were placed directly in a confluent canal of the Sarno river, without any treatment or purification. The purification plant, in fact, although present, was not functioning and was bypassed through a plastic pipe that from the wastewater collection tank delivered into the reclamation canal of the adjacent river. Furthermore, illegal storage of sludge from septic tanks was found which had not been disposed of for over a year.

At the end of the investigations the car wash, extended over an area of ​​approximately 500 sq.m., was subjected to seizure, and the owner of the activity was referred to the Public Prosecutor of Torre Annunziata for illegal management of waste and discharges unauthorized.

Today, in Turin, in the headquarters of the Royal Palace, the Deputy Chief of Staff of Defense, general of the army corps ...
112
Read