Rome, almost 600 grams of marijuana in the backpack: Foreign 29enne blocked by the Army 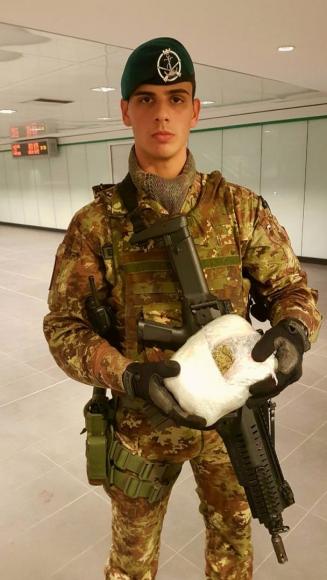 A foreigner detained during the Easter holidays on Metro C "Malatesta" during a check by the military personnel operating in the Army will have to answer with direct rite, before the judicial authority, of the crime of detention and drug dealing. scope of the "Safe Roads" operation.

Given the great agitation of the boy, the lagooners belonging to the Lazio-Umbria-Abruzzo group, which operates under the command of the Sassari brigade, invited him to open the backpack to deepen control.
So they discovered, wrapped in different towels, to hide and disguise the smell, almost 600 grams of marijuana. Immediate intervention of a patrol of agents of the State Police of the police station Porta Maggiore, which, having taken over the military report, proceeded to arrest and seize the drug.

About 7.000 soldiers are involved in the 'Safe Roads' Operation, in competition with the Police for the garrison of the territory and of the main sites and metropolitan areas. Throughout the national territory, from 1 January 2017 to today, the Army has allowed the identification of 44.197 people, 232 of whom were in custody, 107 reported, 10.833 vehicles controlled, 7 weapons seizures and 511 counterfeit items (clothing, CD / DVDs and more).

Today, in Turin, in the headquarters of the Royal Palace, the Deputy Chief of Staff of Defense, general of the army corps ...
119
Read