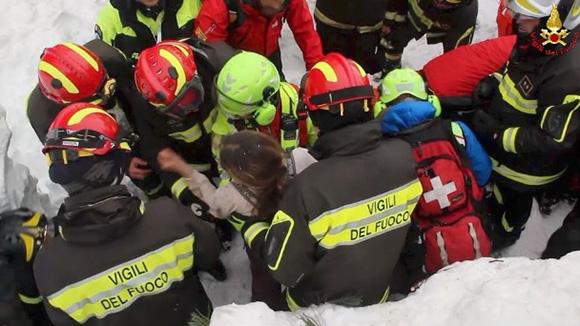 The heart of all Italians is beneath that ghostly snowdrift, seeing them come out alive one by one partially relieves us of the despondency in which we were plunged. Thus the Undersecretary of Defense Gioacchino Alfano and coordinator of the Popular Area-NCD in Campania, in a note.

The thought then goes to the rescuers and the GdF mountain rescue, in their legs that damn night was the strength of an entire country.

Certainly, once the emergency is over, it will be necessary to review some procedures, which were inadequate in extreme cases such as the one we had to face..

The commitment of competition of the armed forces, from hours to hours, is becoming increasingly massive, precisely because of the emergency in the emergency, 3000 the mobilized men and about a thousand mechanical means of various types made available. Suffice it to say that the only Italian Army to date has intervened in sixteen municipalities in four different provinces with over two thousand two hundred units and six hundred vehicles used. There are also, in the affected areas 400 carabinieri and special helicopters for SAR tasks of the Air Force, only this morning did 14 go out in very difficult conditions, but also navy riflemen of San Marco.

Alfano concludes - we are in continuous contact with various local administrators and with our colleague, undersecretary Federica Chiavaroli.