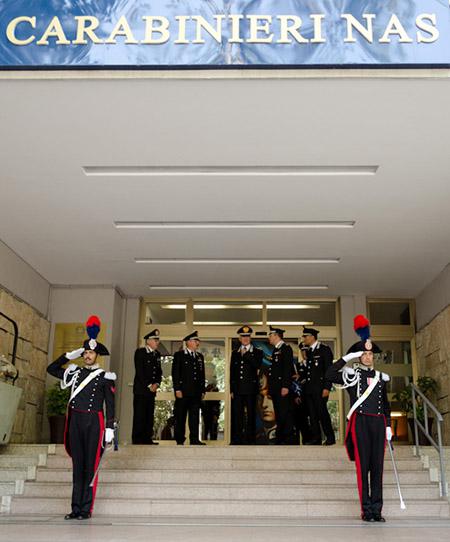 An internationally renowned event on the topic of food fraud "Fighting food crime, enforcing food safety" was presented to the press yesterday with a conference held at the headquarters of the Carabinieri NAS (Nuclei Antisofisticazioni e Sanità) of Rome.

The event, organized in synergy between the Ministry of Health with the Ministry of Agricultural, Food and Forestry Policies and the General Command of the Carabinieri, will host the 9 and 10 July, in the Auditorium of the Italian Pavilion Expo Milano 2015.

To illustrate the topical points were the sen. prof. Andrea Olivero, deputy minister of agricultural, food and forestry policies, the Hon. Beatrice Lorenzin, Minister of Health and General Commander of the Carabinieri, General Tullio Del Sette.

Among the topics discussed, it emerged that among the aspects that receive constant attention is that of fraud in the food sector. The growing interest in food and the important business that surrounds it, both increasing not only in Italy, can attract those in this sector who see the possibility of easy profits and are unscrupulous for the health of citizens.

The problem affects the authorities in terms of commodity, economic, commercial and legal (this is a type of crime that is not specifically identified in our legal system, but which is punishable because it falls under other types of criminal law). But above all, the topic is relevant for health risks which - at least at the potential level - underlie every fraud and every adulteration.

The Italian food security model and the network that allows it to work has been enriching in recent months a new chapter, precisely related to the fight against fraud, in light of the interest that the European Commission is also showing for the topic . Italy is in the front line and actively participates in the construction of the network that will support that of the police, with which it will constantly dialogue: projects are already underway that see civil and police organizations side by side in countering frauds, for example in the field of food supplements.

In support of these statements there are data that, during the press conference, are disclosed on the web portal, included in the 2014 Annual Report of the National Integrated Plan, a planning tool shared by all the sector authorities, coordinated by the Ministry of Health, and to which the ministry for agricultural food and forest policies, the ministry of the environment and the protection of the territory and the sea, the autonomous regions and provinces, the Customs and Monopolies Agency, the specialized departments of the Carabinieri the State Forestry Corps, the Port Authorities and the Guardia di Finanza.

The 2014 data give the idea of ​​the solidity and capillarity of the Italian food safety system; it should be remembered that the data of the food sector is combined with those, no less important, relating to the veterinary health sector and animal welfare.

The Local Health Authorities (ASL), through the competent veterinary services and hygiene and food safety and nutrition, have carried out 171.327 inspections and 8.051 audits on establishments for food of animal origin (detecting 16.946 non-compliance, related to structural conditions and equipment ) and controlled 287.823 operating units of food businesses (detecting 50.720 irregularities, especially in the catering sector, followed by producers and packers who mainly sell to retail).

The non-conformities detected mainly concerned general and staff hygiene, facilities and HACCP (procedures aimed at preventing the dangers of food contamination, editor's note). Samples were analyzed by the official laboratories of110.757, of which 2.008 were found to be non-compliant. For the infractions to be found, the ASL 66.628 has adopted administrative provisions and communicated to the judicial authority 1.115 news of crime.

Border control, another cornerstone of the food safety chain, is carried out directly by the peripheral offices of the Ministry of Health (PIF and USMAF), in coordination with the Customs and Monopolies Agency. I would like to remind you how important both the volume and the effectiveness of this activity is that the ministry is directly involved; Overall, our offices have performed document checks on more than 200.000 batches, physical checks on more than 25.000 shipments, more than 7.000 and samples taken. we have registered 440 "no admissions" of shipments on the territory of the Community.

The framework of official controls is completed with the targeted activity carried out on the territory by the Carabinieri for the Protection of Health - NAS.

The activity has been enriched by the contribution of the Central Inspectorate for the protection of quality and the repression of frauds of food products of MIPAAF (ICQRF), for the control of the merchandise quality and the fight against fraud of generic food products and that of the various judicial police forces: Port Authorities, Carabinieri for Agricultural and Food Policies - NAC, State Forestry Corps, Guardia di Finanza, Customs and Monopolies Agency.

However, one can not lower the guard in the sector of food safety in general, and in particular in that of frauds; and in this scenario the Conference should be seen, which will give the opportunity, on the first day of the work, to illustrate to the guest technicians, coming from countries taking part in Expo in every part of the world, in different sessions characterized by the geographical area of ​​origin of the speakers, the Italian system and encourage the comparison between the delegates on the most effective actions and on the prospects for the creation of a collaborative network even wider than the existing one.

On the second day, the Italian production reality and the operation of our technicians will also be shown through visits to farms and production facilities, organized together with industry associations.

The hope is that the image of Italy will be further strengthened and at the same time enriched the global perspectives of contrasting the scourge of counterfeits, in the spirit of the 2015 Universal Exposition.

Who are the NAS

The Antisofistications and Health Centers (NAS) are responsible for carrying out multiple and varied institutional tasks, most recently summarized in the DM 26.02.2008, as supplemented by the DM 28.10.2009, which basically aim to ensure safety in four macro-areas:

The military of the NAS attend multidisciplinary training courses of varying duration, based on a cycle of studies that allows the officers to graduate in "Law" and / or the 1st level Degree in "Safety Sciences" and the Specialized Degree in "Internal and External Security Sciences" and to the Inspectors the 1st level Degree in "Social Security Operators". In addition, part of the Marescialli staff, who has attended dedicated courses and masters, holds the status of "Inspector Anti-Doping Investigation" and "Oil Tasters".

• exercise the functions of judicial police under the direction of the judicial authority, as they are considered "PG Services" pursuant to art. 56 cpp;

• perform, as supervisory bodies in the sectors covered by art. 4 of DM 26.02.2008, administrative activity of a preventive nature that can evolve in judicial police investigations;

• operate on the initiative or by delegation of the Judicial Authority or at the request of the Ministry of Health or of the territorial Weapon as well as on the reporting of citizens.