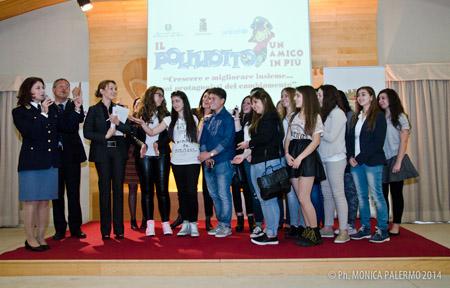 Classes from all over Italy and policemen met yesterday morning at the State Police Car Museum for the awarding of the competition, now in its 14th edition, "Il policizio un amico in più".

The competition is part of a project that aims to promote the development of a culture based on legality, respect for the rules and the principles of tolerance, fundamental characteristics for a civil society, considered essential to guarantee the precious good of security and peaceful coexistence.

Present in the hall the prefect Vincent Panico, head of the secretariat of the public security department and the quaestors of the various Italian cities of the present classes, a significant presence that, as pointed out by the prefect, strengthens the combination "school and state police, forces of the 'order in general', adding that "the school, the teachers, the teachers and especially the students, are the bulwarks of legality, which is why we need contact with them because they are the future especially in the difficult lands of the south. and it is they who ask to speak about the main values ​​of justice, respect, prevention ".

The national competition was open to school children of all levels. Each edition, over the years has dealt with different issues, taking a cue from social issues and directing the students to reflect on what could be the inputs to carry out the work. Reflections to be transformed into actions, in moments of daily life, for greater respect for the rules and for building a shared culture of legality.

In this edition, the first prize for multimedia works was won by a school in Marcianise, Caserta, which produced a video clip entitled With a small action the chain of reactions will never end, realized in the Land of fires. The jury's motivation was: "quality of the images, the soundtrack, the theme dealt with in an exemplary way to convey a positive message already clear from the title".

Among the many literary works that participated, the first prize went to an elementary class of a school in Sassari who wrote a poem entitled The magic of the constitution; so motivated by the jury: "Poor rhyming kissed, made in a choral way, defines the Constitution a document that has become a great monument, whose rules, if respected and shared, can give rise to the magic of change".

After the prizes on stage a surprise for the young public: Rex, the splendid German shepherd of the homonymous series, which has been caressed and photographed by the boys.

The winners will be given a large white chocolate bar with the logo of the "Il poliziotto un amico in più" contest, created by Cioccopassione, an Italian company famous for homemade chocolate in all its forms.