Charity match for the victims of the flood in Sardinia 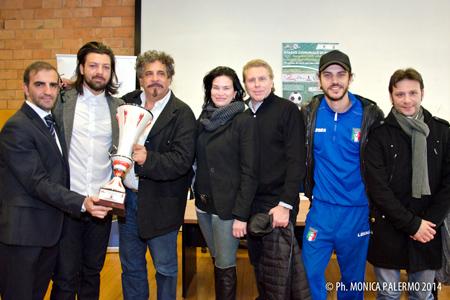 The Trio of Solidarity Luca Tanzi was presented to the press today at the Olympic Preparation Center of Acqua Acetosa, a football match featuring players and law enforcement personnel.

In November 2013 Sardinia was hit by strong floods, 17 people lost their lives, including forty year old Luca Tanzi, assistant chief of the State Police, while trying to rescue a life in danger.

To remember his heroic gesture and to give support to the victims of the flood, the ACAH association (All Cops Are Heroes) and Play Night World (protagonist, among the many manifestations, of the "Derby of the Heart") have become promoters of this charity initiative that the 29 March 2014 will see amicably challenged, in the municipal stadium Franco Frogheri ex Quadrivio di Nuoro, the teams of the National Football Actors, of the National ACAH, Play Night World, of the Police Headquarters of Nuoro and some old Glories of the Nuorese.

The proceeds will be donated to Annalisa Lai, life partner of the assistant State Police chief Luca Tanzi, who in turn at the conference will reveal to whom the collection will go.

Thanks to the support of the Prefect Alessandro Pansa, Chief of Police, the event was granted the patronage of the State Police.

Those who cannot attend the event can make their presence felt by sending a contribution to:

ACAH ALL COPS ARE HEROES

During the night, the carabinieri of the ROS and of the Provincial Command of Milan carried out an Ordinance of ...
1102
Read