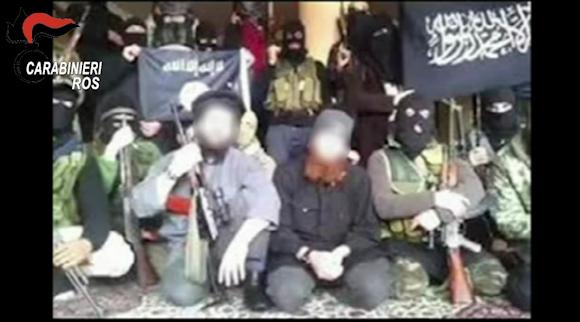 In the early hours of today, the ROS Carabinieri executed an order for pre-trial detention in prison issued by the Turin Court of Review against the Tunisian citizens AFLI Nafaa (27 years), MEJRI Bilel (26 years) and BEN SAAD Marwen (31 years), considered seriously suspected of the crime of association aimed at international terrorism.

The restraining order derives from the elements collected in the context of the activities carried out by the ROS of the Carabinieri in the context of a survey conventionally called TALIBAN and coordinated by the Turin Public Prosecutor's Office.

In the context of activities to prevent and combat the phenomenon of the so-called "foreign fighters" and "lone wolves", in the autumn of 2015 a group of Tunisian citizens had been identified who arrived in Turin requesting a residence permit for study reasons, enrolling at the this University and releasing untruthful attestations in order to obtain the title both to the enrollment and to the relative scholarship. The same, although regularly enrolled and scholarship holders who zeroed the university contribution, if on one hand they had never attended classes or taken exams of their degree course, on the other they had Facebook profiles whose contents in they had suspected from the beginning the proximity to environments characterized by ideology of terrorist groups of Islamist origin. Indeed, in the case of AFLI Nafaa and LABIDI Wael, such contents were clearly praising the Islamic State.

After the fictitious enrollment at the University of Piedmont, the suspects had started moving between Turin and Pisa, settling permanently in the latter city to handle an intense criminal activity of trafficking in drugs.

During the complex and detailed investigation, developed also thanks to telephone and telematic interceptions, as well as with targeted observation and tracking services, the existence of a criminal group emerged, composed of the Tunisians investigated, who had managed to fit into the social fabric , especially among the younger age groups, dedicating themselves to various criminal activities, especially to trafficking in drugs and whose members had simultaneously joined the IS (Islamic State), with particular reference to the faction of Ansar al-Sharia in Tunisia, manifesting a hidden but strong anti-Western sentiment and sharing the most violent intentions of radical Islam, as well as sharing jihadist propaganda material on the Internet.

Moreover, the social dangers of the suspects emerged both from their frequent visits and from the alleged participation in a meeting of Ansar Al-Shari'a (a terrorist organization of Egyptian origin, member of the IS and present in the Sinai area) in Tunis, held by leader ABU AYAD (leader of the Tunisians of Tunisia, suspected of being the mind of the attacks on the Bardo Museum and in Sousse, killed the 14.06.2015 by the US Air Force bombings), and by the admiration and support expressed through the social networks towards militants who died in the theaters of war for the jihadist cause.

During the TALIBAN survey, moreover:

it has been found that two subjects identified in LABIDES Wael and ZEDDINI Khaled and belonging to the relational circle of today's investigated they had left for Syria foreign fighters, where they would then die in combat;

the 19.08.2016, CHIHAOUI Bilel was expelled by decree of the Minister of the Interior, at the request of the ROS, letting the will of a possible, imminent martyrdom shine out because the 11.08.2016 had posted on his Facebook profile a kind of epitaph in Arabic, in to whom he thanked his parents, his foreign friends and all his friends who died as martyrs (shahid), exalting the heroism of the combatants and greeting everyone until the day of his death; in particular, at the end of the post the date of 11.08.2016 stood out with the indication of Pisa and, immediately after, CHIHAOUI had changed the image of his profile, publishing the photo of a man who was holding a gun in the act of loading it for prepare to shoot;

TEBINI Bilel has moved away from the National Territory;

pending the conclusion of the investigations relating to the acts of terrorism, the remaining three subjects, AFLI Nafaa, BEN SAAD Marwen e MEJRI Bilel they had already been confined to pre-trial detention, first in prison and then under house arrest in the provinces of Pisa and Varese, due to drug trafficking thanks to acquisitions related to drug trafficking in the context of this investigation; in particular:

In the meantime, in May of the 2017 the Public Prosecutor of Turin had requested the GIP to issue a precautionary measure against AFLI Nafaa, BEN SAAD Marwen, MEJRI Bilel, CHIHAOUI Bilel and TEBINI Bilel for the offense of association aimed at international terrorism.

In the following month of June, the Turin GIP had however rejected this request for the application of a precautionary measure. In particular, after examining the evidence collected for each suspect, as summarized by the extender of the Ordinance of the Court of Review issued today, «finally, the GIP concluded the existence of behaviors that, although expressing the strong social danger of all the suspects, remain within the scope of a nebulous and unequivocal phase of possible progressive radicalization and extremism and do not cross ) the threshold of the criminal law ', although it must maintain' maximum public security checks against them '».

At the end of that same month of June, the prosecution had appealed against this rejection to the Court of Review, which, at the hearing of the chamber hearing held last 26 October, had reversed the rejection of the GIP, applying pre-trial detention in prison to all five suspects.

CHIHAOUI Bilel and TEBINI Bilel had not intended to appeal and so against them the Reorganization Order became enforceable in December. Nevertheless, both being abroad, the precautionary measure against them has not yet been implemented.

Regarding today's arrested, at the hearing held yesterday, 23 February, the competent college of the VI Criminal Section of the Supreme Court had rejected the appeal against the Order of Review, which had thus become enforceable against them.