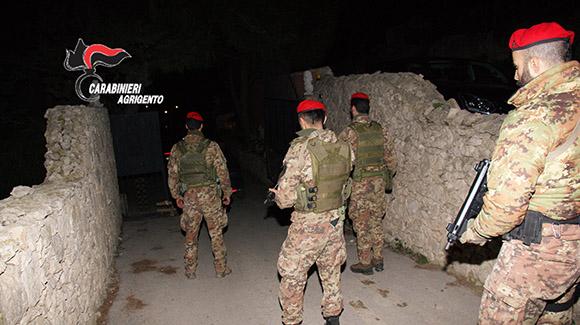 The carabinieri of the provincial command of Agrigento have executed fifty-seven orders for precautionary custody issued against the top management and the mafia families of "Cosa Nostra" of Agrigento. The impressive blitz, ordered in the night from District Anti-Mafia Directorate of Palermo with the code name "Operation Mountain", was performed by 400 military, supported by helicopters, by Squadron with Eliportato Cacciatori Sicilia and from dog units. The operation has in fact disarticulated the mandates of Santa Elisabetta (Ag) and Sciacca (Ag), as well as sixteen mafia families in the province. The mayor of San Biagio Platani (AG) has been arrested for external competition in the mafia association. Documented close connections with the summits of the coasts of almost all of Sicily and with the 'ndrine Calabria. Also verify extortions against 27 companies and a thriving drug trade. Lace was also demanded by the cooperatives for the management of asylum seekers. Seized seven companies. Dozens of searches are still ongoing.

At 3 at night, the blitz of the provincial carabinieri of Agrigento commenced. A helicopter watched from above, quickly making the shuttle between Agrigento, Favara, Sciacca and Monte Cammarata. Military 400, plus the Carabinieri of the Squadron with Eliportato Cacciatori Sicilia and dog-based units for drug and explosive research have simultaneously burst into villas, apartments, country houses and farmhouses. In a few minutes, the handcuffs of 57 were taken by dangerous subjects, mostly heads of head and head of "Cosa Nostra" of Agrigento. Almost all of Sicily involved in the operation. Almost the entire province of Agrigento. But also important centers at the gates of Palermo, Catania, Enna and Ragusa. The measures were issued at the request of the District Anti-Mafia Directorate of Palermo. The accusations are, for various reasons, those of an armed mafia association, aimed at extortion, trafficking and drug dealing. The fictitious heading of aggravated goods, the political-mafia electoral exchange, the external competition in the Mafia association and the aggravated facilitation of Cosa Nostra are also contested. The carabinieri also seized seven companies, in fact attributable to some of those arrested.

Today's vast operation is the result of a complex and prolonged investigation by the Carabinieri of the Agrigento operational department. Started at the end of 2013, it was carried out with the most sophisticated telephone and environmental interception technologies, with satellite tracking systems and, above all, with a tireless old-style survey activity, made of tracking and observation services, possible only thanks to the capillarity of the numerous carabinieri stations scattered throughout the mountain area of ​​the province.

It can be assumed that, in one fell swoop, the summit of What our Agrigento.

The investigations have fully shed light on the current organizational and management structure of the mafia mandates of Sciacca (AG) and of Santa Elisabetta (AG). But they also documented the existence of a new mandate, that of the "Mountain", from which, inter alia, the operation takes its name. The new mandate was found to be the result of a choice made in 2014 by 37enne Francesco Fragapane, son of Salvatore, the latter already head of the province of What our Agrigento and always in close relationship with Totò Riina. The rampant heir, shortly before being arrested, placed the mandate of St. Elizabeth in the hands of 78enne Giuseppe Luciano Spoto, head of the family of Bivona (AG), in fact annexing all the compliant mafia families of the mountain area of ​​Agrigento.

In short, it was shed light on the summits of all the Agrigentinian mandates and of the sixteen mafia families connected to them. In fact, the leaders and affiliates of the mafia organizations of Santa Elisabetta, San Biagio Platani (AG), Bivona, Cammarata and San Giovanni Gemini, Favara (AG), Raffadali (AG), Cianciana (AG), Sciacca, Casteltermini (AG) have been arrested , Castronovo di Sicilia (AG), Alessandria della Rocca (AG), Sant'Angelo Muxaro (AG), Palma di Montechiaro (AG), Capizzi (ME), Caltavuturo (PA) and Racalmuto (AG).

The carabinieri cameras recorded secret meetings and meetings, highlighting the complete and current interconnection between the heads of deportment, the bosses of the mafia families of almost all the Sicilian provinces and even members of the 'ndrine Calabria. The interception captured during a summit is emblematic, in which the bosses say: "The province of Agrigento is more serious ... of Palermo there was a dozen reliable ... there are more .. I can get to Corleone who are still people with their heads on their shoulders. People who tell you something and it's one thing! "

The investigators then revealed a dense network of extortion. The intercepted conversation is emblematic, in which the heads of the family affirm: "Some stores want the discount. If we must always take the knife, those jump the valley and go the other way. Basically there must be the spring ... tighten and spread ... like the rubber band! ".

In fact, there have been documented requests for lace to the detriment of twenty-seven contracting companies of public works of great value. In ten cases, the "putting in place" was successful. The claim ranged from the 2000,00 to the 20.000,00 euro. To carry them out, the suspects have put in place the most disparate acts of intimidation, up to the arson of several operating machines. The companies targeted are above all those in the construction and construction sectors and come from the provinces of Agrigento, Palermo, Caltanissetta, Messina, Enna and Ragusa. The works had been commissioned by various municipal administrations in the most disparate territories of the provinces of Agrigento, Palermo and Enna. In one case, the setting up was attempted against a company in charge of the extraordinary maintenance work on the road paving on the Island of Lampedusa. In all these cases, the total synergy between the most specialized investigative bodies of the Arma and the extensive capillarity of the numerous carabinieri stations scattered throughout the territory was invaluable.

Two of the attempts at extortion have been made to the detriment of the same number of Agri- centine cooperatives involved in the management of reception services for asylum seekers, against whose administrators was demanded, on the one hand, the recruitment of subjects close to the mafia association and, on the other hand, a percentage for each guest.

With the accusation of external competition in the mafia association, the carabinieri have also arrested the Mayor of San Biagio Platani (AG) Santo Sabella. It is suspected of having made agreements, during the May 2014 administrative consultations, with the heads of the local mafia family to agree on the candidacies, both in support and in opposition. He is also accused of having guaranteed to the organization facilitations in the management of public tenders banned by the Municipality.

Arrested also the husband of a councilor of Cammarata (AG). The accusation is that of a mafia political exchange vote. He is held responsible for having successfully asked, in exchange for the promise of future utility, the electoral support of the local mafia boss to the 2015 administrative consultations.

La District Anti-Mafia Directoratemoreover, assuming the extremes of the fictitious heading of assets in order to circumvent the application of the legislation on asset prevention, ordered the preventive seizure, for a value of about one million euro, of seven companies operating in the construction sectors and of land movement, as well as betting and slot machine distribution.

During the investigation, the carabinieri finally ascertained the existence of substantial drug trafficking. Cocaine, hashish and marijuana. To find the charges, the military, on one occasion, have arrested a courier with a pound of pure cocaine in the trunk.

In the early hours of this morning, 27 November, soldiers of the ROS, of the Locri Group, and of the Helicopter Squad ...
281
Read