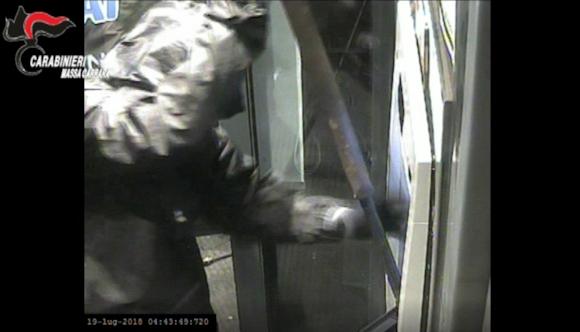 In Bologna, in the early hours of the morning, the Carabinieri of the Compagnia di Pontremoli arrested, in execution of a detention order in prison issued by the Massa Court at the request of the local Public Prosecutor, SC, 29enne pleaded, accused of having done part of an unscrupulous criminal battery that in one night last July 2018, in the province of Massa Carrara, had tried to blow up an ATM in order to rob it; the man, together with other unidentified accomplices, had put in serious and grave danger the houses and the people who were in the entire block before leaving the explosive in the stolen car used for the coup and abandoned, equally dangerously, always in the inhabited area.

The provision stems from an articulated and complex investigative activity, called "Operation Marmot", carried out by the Carabinieri of the Compagnia di Pontremoli under the direction of the Deputy Prosecutor of the Republic of Massa, Dr. Roberta Moramarco, which allowed the GIP of the Court of Massa to issue the measure against the man.

But let's get to the facts. We are on the night of the 19 July 2018 when SC, despite already subjected to the precautionary measure of the obligation of daily signature in Bologna for similar crimes, arrives in Tuscany together with other accomplices, all components of a real criminal battery. About one o'clock in the morning the criminals take possession of a Fiat 500 car regularly parked by the owners outside their home in Villafranca in Lunigiana (Ms); it is the selected cover car to carry out the blow; aboard the same is loaded with everything needed to rob the ATM including various tools intended to break through the door and, above all, the explosive craft exploding to explode, known in criminal jargon as "marmot", from which it takes its name the operation. Everything is organized with the utmost care and criminal professionalism and the criminals, in addition to being armed, are provided with balaclavas, gloves and overshoes socks in order not to leave the slightest trace. Before arriving at the chosen place for the crime they stop at the petrol station where, always misrepresented with balaclavas and gloves, they supply the vehicle subject to theft. It's about 03: 00 hours and it's still a few hours before the battery decides to take action; a last reconnaissance of the area before acting at 04: 40, when the criminals arrive at the branch of the “Carispezia” bank located in the Barbarasco district of the Municipality of Tresana, a quiet town in northern Tuscany. Taking advantage of the darkness of the night the band after having suddenly forced with large iron tools the ATM brings the so-called "marmot" into the banknote dispensing slot, using it to push it into a long iron bar to which the dangerous device craft is connected; the operation takes a few minutes according to a consolidated modus operandi and everything is ready to blow up the ATM; two long wires (08 meters) placed in short circuit, connected to a battery and a paper clip constitute the trigger; the bank has sounded the alarm for about a minute but it is only a small disturbance for the commando accustomed to operating in these conditions; however, in the area there is a Carabinieri patrol that received the alarm from the bank's operating room and immediately goes to the bank: it is the unexpected that blows up the plans and forces the criminals to flee fortunately before the arrival of the military. 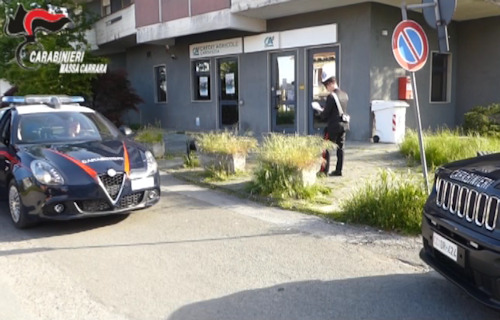 The Carabinieri arrived on the spot to immediately reconstruct the facts; from the visualization of the images of the video surveillance systems it is clear the insertion inside the ATM of the explosive device even if it is not possible to ascertain if it was extracted during the escape; all nearby homes are therefore urgently evacuated, the area is fenced off and secured to allow intervention by the Arma bombers who arrive shortly afterwards and ascertain, after having followed all the necessary procedures, the absence of the bomb explosive from the ATM.

A few days later the soldiers found the car used for the shot abandoned a few kilometers from the place of the facts and ascertained that it was there that the device was abandoned; therefore the personnel of the bomb technicians is made to intervene again and, after the safety of the area has been established, definitively defuses the explosive device. Complex and high-risk operation, considering that the accidental firing of the bomb on the car could cause a serious explosion.

On the car made safe, in addition to the bomb, all the material used by the command is found: tools for burglary, gloves and socks used for the shot. It is from these elements that the military began to reconstruct the story; in the hurry of escape, in fact, the arrested person made a fatal mistake: despite all the precautions he left papillary footprints on the socks found which are sent to specialized personnel of the RIS of Rome for fingerprinting. The response is immediate: they are undoubtedly traceable to the suspect. All the videos of the video surveillance systems of the bank and of the gas station are analyzed and technical activities are started up which allow us to collect the last decisive clues, necessary to give a name and a face to one of the members of the “marmot ”, Under arrest today.

During the phases of the arrest, to which the man did not resist, the Carabinieri also carried out a house search at the man's house, finding and seizing PCs, mobile phones, various computer equipment, 2 car keys of suspected origin and various break-in tools, all material that will be analyzed in the coming hours and that will be the subject of further investigative investigations.

The man is suspected, in fact, of having committed together with other accomplices a series of other blows throughout northern Italy, always with the same modus operandi, episodes that will be the subject of further investigations by the investigators. The 29enne boasts a long criminal record and has been involved in similar investigations that have shown its participation in various blows committed with explosives against ATMs and fuel distributors; in the 2011 the same, after having detonated an ATM in the province of Ferrara, together with other accomplices, he tried to overwhelm a Carabiniere at a checkpoint in his flight and abandoned an accomplice at the end of his life who had been injured by the circumstances. explosion, being investigated for attempted murder.

The so-called "marmot" technique is a widespread criminal technique that allows criminals to cause an ATM to explode, managing to remove the contents that can even reach 100.000 euro; the blows are usually carried out by specialized gangs, such as the one in which the arrested man was a part, who are able to complete the ATM assault in a time that goes from 02 to 04 minutes, causing strong explosions that destroy usually the premises of the credit institutions almost completely. The bombs are handcrafted at home using pyrotechnic powder.

The arrestee was associated with the Bologna prison at the disposal of the judicial authority and will now have to answer for the crimes of receiving the car used for the theft and attempted aggravated theft for having been committed by a misrepresented person and wearing weapons. In the coming days it will be subjected to a warranty interrogation.

During the night, the carabinieri of the ROS and of the Provincial Command of Milan carried out an Ordinance of ...
1197
Read

As part of the health emergency connected to the epidemic spread of "covid-19", the Carabinieri Command for the ...
276
Read