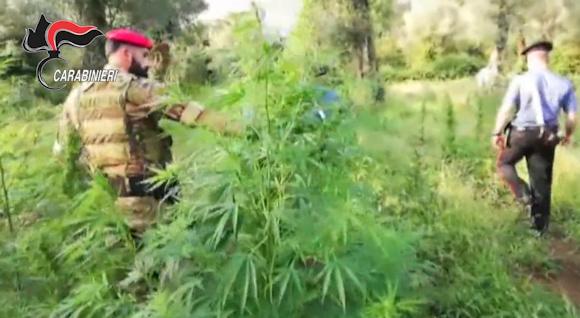 In the early hours of this morning, 27 November, soldiers of the ROS, of the Locri Group, and of the Chilean Hunters of Calabria Squadron, executed 8 precautionary measures, of which 4 is in jail against BENCI Luca cl.86, VIOLI Giorgio cl. 76, SAINATO Salvatore cl. 57 and SAINATO Vincenzo cl. 81, as well as 4 dwelling obligations in the municipality of residence towards URSINO Cosimo cl.85, LOMBARDO Vincenzo cl. 86, JENTILE Domenico cl .71 and DE MASI Massimiliano cl. 73, all residents in the Gioiosa Jonica area.

The provision, issued by the GIP of Reggio Calabria, Dr. Alessandra BORSELLI, at the request of the District Anti-Mafia Directorate, headed by the Public Prosecutor, Dr. Giovanni BOMBARDIERI, is the result of an articulated investigation activity carried out by the military of the Arma, through which it was possible to dislocate an organization composed of a group of subjects dedicated to a series of crimes including, mainly, the cultivation of numerous plantations scattered in the agri of Gioiosa Jonica, Grotteria and Martone, as well as the relative traffic of the enormous quantities of narcotic substance produced.

The investigations, directed by the Assistant Public Prosecutor Giuseppe LOMBARDO and by the Deputy Prosecutors Dr. Simona FERRAIUOLO and dott. Francesco TEDESCO, were conducted thanks to copious interception activities, in addition to numerous observation and shadowing services by both the Calabria Hunters, as well as the investigative departments of the Weapon. Important for the investigations, moreover, have been the declarations of some collaborators of justice that have confirmed the investigations of the investigators.

The crimes charged in various capacities by the investigators concern the crime of mafia-type association, the association aimed at the illicit trafficking of narcotic drugs, as well as the crime of extortion aggravated by having been committed by persons belonging to a mafia association. 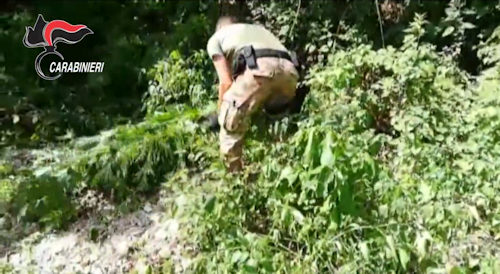 Based on the activities carried out, it was possible to ascertain that the subjects, contiguous to the Ursino clan operating in the territory of Gioiosa Jonica and neighboring areas, making use of the intimidating force of the organization, were dedicated to the activity of production and trade of the narcotic substance. , thus assuring the criminal group of reference a huge flow of money able to replenish the assets and thus facilitate the control of the territory. In fact, as a demonstration of the operative capacity of the coterie, the soldiers of the Arma were able to seize in numerous searches over 5 thousand marijuana plants, as well as about two tons of drugs, as well as thousands of seeds of excellent quality in terms of yield, ready for use to be buried.

The investigations, finally, made it possible to ascertain that one of the suspects, the chief's son, had carried out an aggravated extortion with mafia-type procedures against the managers of some entertainment facilities that arrived in Gioiosa Jonica for the patronal feast of San Rocco, imposing the delivery of both money for the parking of the rides and the delivery of numerous tickets for the amount of several thousand euros.

Those arrested were translated at the Reggio Calabria district house at the disposal of the principal AG.

Today, in Turin, in the headquarters of the Royal Palace, the Deputy Chief of Staff of Defense, general of the army corps ...
112
Read