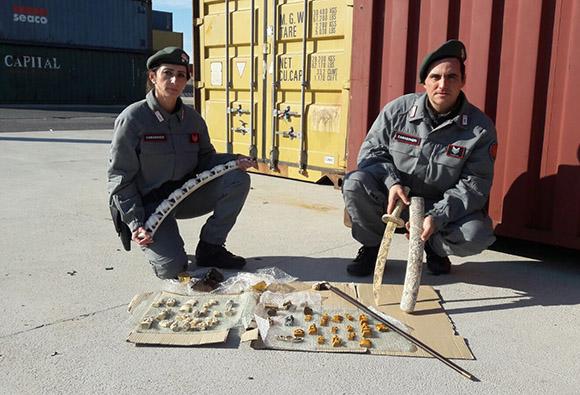 Seized in the Port of Civitavecchia over 50 pieces of ivory of alleged African elephant (Loxodonta africana) for a value of about 100.000 euros.

The precious material, composed of worked objects of exquisite workmanship at first sight of Asian origin, hidden in a container in the depot of the International Port of Civitavecchia was kept together with provisions and probably came from a triangulation between some Asian port and the Port of Sydney, from which, based on the vision of the loading posters, came the ship on which the container was traveling.

The operation, still in progress, involved the CITES Operational Unit of the Carabinieri, as a specialized structure for CITES, the Guardia di Finanza, responsible for customs controls, and the Customs Agency.

The African and Asian elephants are species protected by the Washington Convention, and illegal detention and marketing are punished by Italian law with arrest and fine. The value of ivory is estimated between the 800 and the 2000 dollars per kilo, depending on the type of processing.

Every year 25.000 elephants are exterminated in sub-Saharan and southern Africa and dozens of rangers killed trying to protect them in the national parks or hunting reserves of the continent.

Revenue from ivory traffic (confirms Interpol and UNEP) feed the coffers of organized criminal and terrorist groups in Africa for the purchase of weapons and vehicles. Boko haram, Al Shaabab, and other groups manage natural resources such as rhino horn, ivory, tropical timber, coal and make it their main means of livelihood for their criminal activities that produce further despair and poverty by taking away these resources to sustainable management of local populations.