Home News armed forces Safety Today at the Brancaccio show against the cy ...

Today at the Brancaccio show against cyberbullying 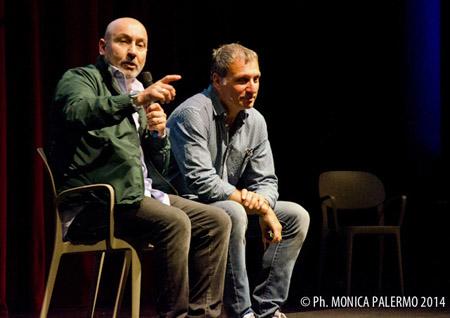 Great success today for the police and communications police at the end of the traveling campaign "Una vita da social" which on board of a truck met about 500.000 students in 40 Italian cities.

A show at the Brancaccio, in the presence of 900 boys from the Roman schools, who saw on stage characters from the entertainment world and policemen. The subject addressed was the "cyberbullsimo". As confirmed by a Roman student "online bullying is widespread on social networks and days like these in the company of the postal police, help us to face and solve the problems that may involve us".

The journalist Luca Pagliari presented his theatrical format "Like, stories of life online", inspired by the story of Andrea Spezzacatena, ridiculed on the web as the boy "with pink pants", a boy of only 15 years committed suicide in 2012. In his format, Luca Pagliari tackles cyberbullying. Present in the room is Andrea's mother who, invited by the journalist to give her testimony, with the emotion in her eyes, went on stage sensitizing the young people born in the web age on how much they can hurt words of derision in the silence of those who read them. On the dramatic cyberbullying theme there have been speeches by Maurizio Battista, Roberto Ciufoli, Tiziana Foschi.

Maurizio Battista, between one joke and another, reiterated the importance of the presence of the police post on the web to protect young people, of how important it is to fight cyber-bullying, perhaps, as he suggested after joking in an interview, with of cyber-slaps. "A life as a mother-in-law", so the comedian jokingly calls him and proudly calls himself the father of a policeman.

Great acclamation of the boys in the hall when, at the end of the show, the protagonists of the famous fiction "Braccialetti rosso" took to the stage.

More than 250 were the reports received by the State Police, from the beginning of the 2013 to today by minors. Complaints against minors for stalking, online defamation, insults, threats, harassment through social networks, email and telephone. It is precisely to protect minors, and those who are more easily plagiarizable, that the police post is present on the web with the project "A life from social", with an account on twitter and a page on facebook which, in just 4 months, has reached about 18.000 likers.

During the night, the carabinieri of the ROS and of the Provincial Command of Milan carried out an Ordinance of ...
1177
Read