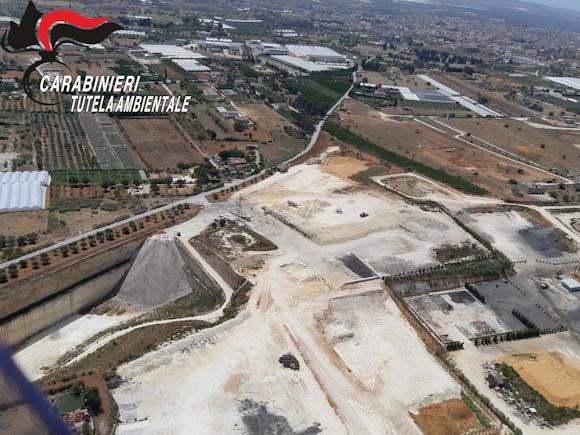 On delegation of the Catania Public Prosecutor's Office, the NOE Carabinieri of Catania, following a targeted investigation in the sector of special hazardous waste management, carried out a preventive seizure decree issued by the GIP at the Catania Court of a disused quarry located in Piano Guastella di Vittoria, used as an illegal dumping ground for toxic dusty waste.

According to the first surveys in the vast quarry, which has an extension of approximately 8.000 sqm. to date, no less than 30.000 tons of hazardous special waste of various kinds have been poured.

At present there are elements to hypothesize that these are waste that, in addition to having a high degree of danger, can also be potentially harmful and / or toxic to health.

On site, the NOE carabinieri, who blocked an articulated lorry intent on spilling a large quantity of waste, requested the intervention of staff from the ARPA (Regional Environmental Protection Agency) of Ragusa who carried out sampling of the materials found and which was in charge of carrying out the subsequent analyzes to establish the origin and characteristics of the waste illegally dumped in the pit of the former quarry.

The investigations showed that for the area of ​​the quarry in question, the owners, in the year 2016, had obtained from the Department of Environment of the Sicilian Region the authorization to carry out a so-called morphological environmental recovery plan with which, following of the presentation of a specific project, it is authorized to "fill" a quarry with materials (generally earth and rocks from other excavations), not dangerous and compatible with the characteristics of the soil, in order to bring the area back to the original plan , without consequences for the environment and for the underlying water tables.

In the present case, instead, according to what could be ascertained during the investigations, the owners, once obtained the authorization, would have allowed the conferment (protracted for at least two years) of an enormous quantity of waste coming from another activity of waste recovery and treatment present in the province of Ragusa, materials having physical-chemical characteristics such as to be considered special hazardous waste and absolutely neither authorized nor compatible with the authorized morphological-environmental recovery activities.

The owners and legal managers of the companies involved have been notified of a guarantee notice issued by the District Attorney of the Republic of Catania with which they have been disputed with the hypothesis of criminal association (art. 416 cp) and organized traffic activities illegal waste (art. 452 quaterdecies criminal code).

The value of the seized asset exceeds one million euros.