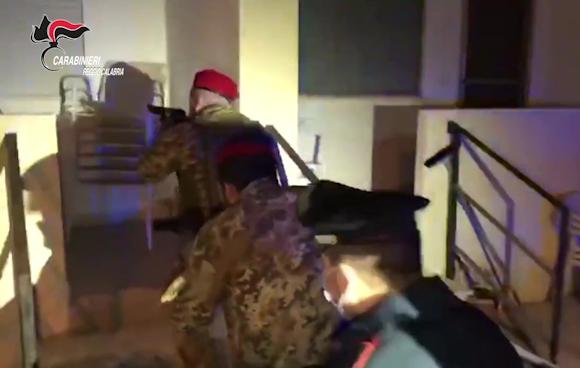 The resourcefulness in violating the prescriptions of the emergency rules dictated by the government, provided the last step to the investigators of the Arma: that house could not be only the buen-retiro of an honest citizen.

In the late evening of yesterday, the environmental conditions generated by the current health emergency were therefore fatal to Cesare Antonio CORDÌ, born in 1978, preventing him from hiding his presence in a house among the many that, in these days, see the only fleeting exit for daily purchases of food.

Then the faint glow of a cigarette - taken from the slit of a shutter - was enough to give certainty to the carabinieri that, in that house in Contrada Monica di Bruzzano Zeffirio, there was the wanted man on whose tracks they had been for days now.

Once again the carabinieri of the Aspromonte province have confirmed themselves as inexorable hunters of fugitives, ready to impose the observance of justice to those who, after the commission of the crimes, try to further evade their responsibilities.

A lightning-fast action, that of the soldiers of the companies of Bianco and Locri, of the carabinieri of the helicopter squadron "Cacciatori d'Aspromonte", which did not give the slightest chance to the escape already orchestrated from a secondary entrance to Antonio's son "u reasons", Which had become unavailable on the occasion of the execution of the" Ransom "operation of the Locri company.

An investigative maneuver that, in August 2019, had allowed the carabinieri of the provincial command of Reggio Calabria, under the coordination of the public prosecutor's office of Reggio Calabria, directed by dr. Giovanni Bombardieri, to deal a very severe blow to the historical locrese gang of the "Cordì", in whose participation the crimes of mafia-type association, extortion, damage followed by fire, illicit competition with threat or violence, transfer were disputed fraudulent valuation, possession and port of arms in a public place, with the aggravating circumstance of having acted to favor the interests of the 'ndrangheta.

In particular, at the conclusion of the investigations coordinated by the assistant prosecutor Giuseppe LOMBARDO and by the substitute prosecutors Giovanni CALAMITA and Diego CAPECE MINUTOLO, a prison custody order was issued against Cesare Antonio CORDÌ since investigated for fraudulent transfer of values ​​- aggravated because committed to the in order to facilitate the mafia association - since, in order to circumvent the provisions of the law on property prevention measures, he fictitiously attributed to his wife GIORGI Teresa the formal ownership of the commercial activity "Gently by Giorgi Teresa"In Ardore.

Investigations are underway to rebuild the network of people who favored the hiding of the 42-year-old leading exponent of the 'ndrangheta of Locri.